Abducted by Asian woman with long black hair and in hijab! 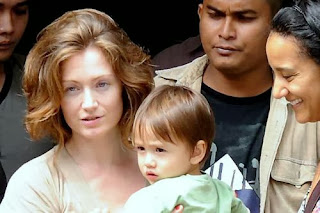 Thank Allah, Freddie the Brit toddler is back with her mom, safe and sound, barely 24 hours after a couple had abducted him at machete-point in Bangsar. In cases that are solved as quickly as this, normal people usually congratulate the police (and not the media or the politicians*). So, congratulations PDRM.

Couldn't help notice that the cops had told the boy's family members and friends NOT to talk to the media. After comparing the following conflicting media reports, I think can understand why. It may be a small matter to some, but it makes a whole world of difference when it's a matter of life and death like the abduction of a child ...

By the Malaysian Chronicle:


CCTV footage obtained from a neighbor’s house showed a white car driving past Sarah's double-storey link in Jalan Terasek 7 at around 6pm before making a U-turn.
A man came out of the car, put on a baseball cap and spectacles before walking towards the house.
A few moments later, the man was seen running to the car with a baby in his arms. The passenger door of the car was then opened by somebody inside, to whom the man passed the baby to ... 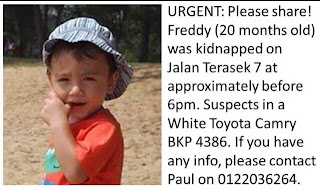 It is believed that the person in the car was a woman, who was wearing a niqab (sic) (a Muslim veil that covers the face, showing only the eyes).
The 38-year-old Sarah, who is believed to be separated from her husband, is still too traumatized to speak to the press. - Malaysia Chronicle h e r e

By the Malay Mail:

Friends of the family have also been warned against speaking to the media. The Malay Mail Online was alerted to the kidnapping after a friend of the toddler’s mother sent an email requesting help to hunt down the man and woman who took Freddie. A British expatriate, named Chris Bailey, said Freddie was snatched from the front garden of his Bangsar home here at about 6pm today. 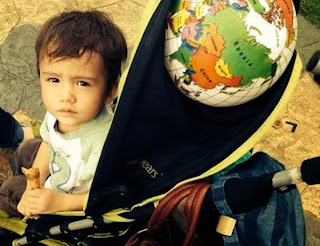 The kidnapper was described as standing about 5-feet-6-inches tall with Chinese or Burmese features.
His female accomplice was reportedly an Asian with long black hair. - Kidnappers knew British boy's family, cops say

The female accomplice could very well have long black hair but we won't know if she was all covered in hijab, could we ...? Mmm ...