Updated:
31/10/2013: So, it was told to me last night by someone close to Jho Lo that the young man does not own and never did own the Malaysian Insider.
I said that's not what I heard, that I heard Jho Lo was pumping money into the Insiders.
"No, not true. My company took some ads in Malaysian Insider. We spent RM150-200k for six months. People know I'm close to Jho Lo so I suppose that's how people got the idea (that Jho Lo pumped money into Insider)," this associate, who wished to be anonymous like many of us in blogosphere, said.
"The portal is owned by that Ini Kali Lah guy. And Jho never met Ini Kali Lah," he offered.
Wallahualam but if it's true, I said good for Jho Low if he'd never met the "Master".
Now, will this Ini Kali Lah guy speak up?

For many of us who were there, that was how it all started during Abdullah Ahmad Badawi's era: a puppet master masquerading as editor-cum-businessman and doubling up as Abdullah's media advisor launched a media campaign aimed at demonizing Dr M. That didn't work out well at all for Abdullah, the "Master", and his friends and business associates. More than just ego was lost; hundreds of millions of ringgit's worth of projects they had greedily earmarked for themselves, thinking that the gravy train would continue to chug along, went up in smoke in the aftermath of the March 2008 general election.

Now this "Master" is back. Read The Mind of the Analyst by Dr Mahathir.

This time, instead of prostituting the mainstream media, he's using The Malaysian Insider. He knows he can't bring down Dr M or Najib Razak, but he can get them to be at loggerheads. He did that in Finding the lunatic fringe in Malaysia and then again in For Najib, an open society and Mukhriz's loss invites Dr M's venom, say analysts. Even seasoned campaigners like Info Minister Shabery Cheek, was dragged into the master's ploy against Dr M. 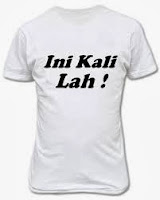 It's not a secret that the man who owns The Malaysian Insider is Jho Low, the young taukeh best remembered for partying with Paris Hilton. But I know Jho Lo is just the money man. Jho Low isn't the "Master" meant by Dr Mahathir. The "Master" is someone else, a man with vendetta, whose company helped out with Lim Guan Eng's campaign in the 13th general election.

Some people credited this "Master" for the Opposition's PRU13 battle cry "INI KALI LAH". But I think that was an exaggeration ...