Master of Fiction. "Reza Aslan has continuously presented himself as a professor of religion. This is done in an attempt to sell his few books, which lack academic and credible references. In one of his recent interviews, Aslan claims, “I am a scholar of religions with four degrees including one in the New Testament . . . I am an expert with a Ph.D. in the history of religions . . . I am a professor of religions, including the New Testament – that’s what I do for a living, actually . . . To be clear, I want to emphasize one more time, I am a historian, I am a Ph.D. in the history of religions.” Aslan also recently said on Twitter, “I have a BA, MA and PhD in the history of Western Religions so yes, again, I am an ACTUAL expert in Judaism.”In actuality, Reza Aslan is not a “professor of religion,” and what he claims he does “for a living” is an outrageous inaccuracy. Reza Aslan is an associate professor in the Creative Writing program at the University of California, Riverside.  He teaches there based on his Master of Fine Arts degree in fiction from Iowa."- The Lies and Misrepresentations of Reza Aslan, Frontpage Mag, 5 Aug 2013

Business FM 89.9 used to be one of my favorite radio stations because it used to be so good at being critical of the Government. Then one fine day it started to become a little too partisan for my liking. WIth the interview with Reza Aslan h e r e, the line is drawn for me. I mean, you can be as anti-government or anti-BN as you like but when you put a foreigner on air - even an award-winning one - so that be can laugh at our faith and thrash this country's judiciary system, you are not worth a dime.

In doing so, I'm told that BFM has flouted the cardinal rule of public broadcast in this country. Under the terms and scope of operations, the radio station agreed that it would not insult or ridicule any race or religion in this country.

I suppose by now the Malaysian Communications and Multimedia Commission would have analyzed the content of the Bible For Muslims interview. Let's see if MCMC boss Sharil Tarmizi has any idea of what he should do under such circumstances. Let's see if Information Minister Shabery Cheek has the political balls to act. Let's see if Attorney-General Gani Patail is consistent in his lack of tolerance towards any quarters who think they can insult this country's official religion and get away with it. 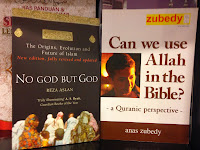 As for the award-wininng Reza Aslan, not everyone is as impressed as the giggling dudes from BFM. Try reading Lies and Misrepresentations of Reza Aslan, for e.g.

Reza Aslan's best seller No God But God came to me last year highly recommended but right from the Prologue, when he finds himself between an offended Muslim and a missionary couple on a train in Morocco, he comes across to me as not only ignorant but presumptuous, and therefore too eager to poke his nose where he shouldn't. There's a reason why I haven't been able to finish the book, I suppose. In the BFM interview, Reza Aslan somehow manages to come across as even more ignorant and presumptuous (or, in Melayu, bodoh sombong) about the Allah issue.

I'd recommend Anas Zubedy's Can we use Allah in the Bible any time. Honest, not pretentious, educational.

Please also read:
1. We Laugh at You by Zakhir Mohamad
2. The Swinging pendulum of Isa alMasih and Yesus Kristus by SatD

If this "religious controversy" involves Sabah Christians you can be almost dead sure this Liberalized Ass has a hand in it. But Malaysia can do without treacherous power brokers with gargantuan political ambitions .... especially when they are consummate bisexuals in practice. Protect our children and descendants, say No to LGBT Freedoms and Same-Sex Marriage

Firstly Reza is a Muslim Theologian - so is not speaking in ignorance.
Secondly he was not insulting his own faith - but pointing out an opinion of Malaysia's judicial ruling on the exclusivity of Allah and how outside peninsular Malaysia that Allah is applicable to all faiths who believe in the one God.
Thirdly he was pointing out that Allah is an Arab word that predates Islam.
Fourthly he found it strange that Muslims in peninsular Malaysia could be confused by Christians using Allah whereas in the rest of the world, including the Arab world and East Malaysia there is no such confusion...

Sabeery Cheek ? So many happening in radio and media including alternative media and he just look up to the sky.

Truth be told, many are laughing and shaking their heads in disbelief.

Another case of shooting the messenger huh.

When someone asked Reza Aslan what happens to an atheist when he dies, this is what he said:

"I don't believe there is a heaven and hell where people who believe what I believe get rewarded and those who don't get punished. That's not a very sophisticated spiritual belief in my view."

Says a lot about what kind of Muslim he is, doesn't it? When the Quran says over and over again that Hell is for those who reject Allah's message, this masuk-bakul-angkat-sendiri "Muslim scholar" says he doesn't even believe in it.

It also tells us why he can be so flippant about this issue. Islam, Christianity, atheism, it's all the same to him. No need to protect the Muslim's faith because even if he becomes Murtad, there's no hell for him to go to.

RE: "Reza is a Muslim Theologian - so is not speaking in ignorance"

If Reza Aslan is a GOOD Muslim Theologian then he should have addressed the arguments (point-for-point) put forth by the Malay Muslim Theologians in defence of the recent Malaysian judicial decision in question, namely:

(in the English language):
http://www.ikim.gov.my/index.php/ms/artikel/7679-heresy-arises-from-words-wrongly-used

... but as things stand, Reza is insidiously laughing at us Malays from his far-away liberal progressive rostrum in defiance of The Proper Name ALLAH designated for His Own Being, Whose Mysterious Essence is an unqualified Absolute Oneness, which is neither susceptible to division nor to multiplication [certainly not as some speculative 3-in-1 innovated hypothesis]

"Lord forgive us for we have sinned against Thee in thought, word and deed. If you do not pardon our rebelliousness then we shall never ever see the light of Paradise, for you forgive all human follies but not the willful ingrate who imputes associations for Thy One and Absolute Sovereignty"

'...but when you put a foreigner on air'. Well I think I can stop reading after that. You are not worth a dime either.

Theological Studies from Harvard Divinity School isn't exactly the equivalent of Islamic studies from Al Azhar university.So Aslan may not know everything about what he's talking about (even the American media think so).

He should check the work of well respected and well known Islamic law scholars (among whom Aslan is not) such as Fazlur Rahman who was in 1969 the Distinguished Professor of Islamic Thought at the University of Chicago.

In his book 'Major Themes of the Qur'an" (Chapter 1, pg 1), he refers to the term Allah as "the proper name for God" - in contrast with Aslan's misguided idea that it isn't - and Fazlur Rahman should know. Other than being respected as a legal scholar, he also did Arabic studies.

Aslan can also check with the Dictionary of the Holy Quran which says that Allah is "not a common noun" but a "proper name". So, since Aslan did speak from ignorance, we can safely expunge his uninformed opinions from all discussions. Unless, one wishes to remain stubbornly ignorant...

If local Christians want to invoke the term Allah because it's a term which predates Islam, then the Christian god would be the one of the pagan gods of pre-Islamic times because that was what the pagans called god. Of course the Christians should know better what they get themselves into (we hope).

No wonder peninsular Malays are confused. We are not pagans and do not refer to one of the pre-Islamic pagan gods as God.

The Arab Christians also refer to elah and elohim as the One God and the false god, interchangeably in their bible. (In Exodus 3:13-15 God asked to be referrred to as YHWH - so how come God = Allah in Malay bible?? It is confusing to the Malays!!). The Muslims, on the other hand, refer to only the One God as Allah.

This Reza Aslan guy is a Iranian-American Shia. So his views should be treated as a hostile non-muslim view. As for his "award winning" title...looks at who is the awarder. I rest my case.

"Q: Are you still a Christian?

Reza Aslan: No, I wouldn’t call myself a Christian because I do not believe that Jesus is God, nor do I believe that he ever thought that he was God or that he ever said that he was God. But I am a follower of Jesus, and I think that sometimes, unfortunately – I think even Christians would recognize this and admit it – those two things aren’t always the same, being a Christian and being a follower of Jesus."

Check out Gleen Back expose on the guy (here)

our universe is not like some of the political parties where father, mother and son (nepotistic practices) are allowed to hold the management posts and if that lead to turbulence just abandon the old one and create a knew one.

Rocky.
This guy is an Iranian Muslim.Therefore he is aShaitt.A deviant Islamic group.

His knowledge in Islam is nil.I mean sunni muslim.God have 99 names and Allah is one of them.All the name are mention in Quran.

I was suprise the Business FM can air his view and make a fun of it.This is more serious the the Border Book store who was charge by Jakim by selling Islamic book not approve for circulation.

Let see what Jakim going to do.

I clicked the link lies and misrepresentations of reza aslan and it goes to a left wing magazine called frontpage founded by david horowitz.For your information this is some of quotes i got about him from wiki..While Horowitz was on the Riz Khan television show with Hussein Ibish, he was reported by Ibish to have published on his Frontpage Mag website: Arabs do nothing on impulse, Muslims have no allegiance to their countries, [and] their only allegiance is to Islam, that’s what they have been taught since birth that’s all they know, Muslims have no borders”[27][28]

In the same television program, Horowitz claimed that the Prophet Muhammad called for the “extermination of Jews,”.
Nice work Rocky

Nothing is more frustrating and embarrassing than arguing with a person whose argument is 100% correct....

You comments too are not worth a dime either. Buzz off

satD asking to check glen beck expose..next you will be asking us to watch fox news and sending donations to the tea party.you are one sad monkey.

. As a point of comparison to the dreaded Communists, Beck mentioned Islamic terrorists, saying he suspects that close to 10 percent of Muslims are terrorists.

That's glenn beck for you SatD

Who is going to sue this Reza Asian guy?

And in which court?

The US courts would most probably throw out any such suit.

And I'd be careful about branding Shia Muslims as this and that.

After all, you wouldn't want one of the Ayatollahs taking potshots at Malaysia, would we?

Put aside Glenn Beck link, I'm only referencing to his interview with NPR. For the actual interview go here http://n.pr/HdcdfN

SatD':This reza guy is a follower of Jesus.. . Haha. He fits into one if the C1-C6 categories as written in your blog. This reza is so predictable

He's right about one thing though. There's more to this than just a matter of religion.