Beautiful, bountiful Malaysia. Did you know that Malaysia is listed as one of Lonely Planet's Top Ten countries to visit in 2014? That's a fact. They listed Brazil as the top country to visit in 2014 as they will be hosting the World Cup in June and July. In second place is Antartica, followed by Scotland, Sweden, Malawi, Mexico, Seychelles, Belgium, Macedonia and Negaraku.

Now, another fact is we are no bimbo nation. Not only is Malaysia beautiful, this latest survey by a London-based think tank says we are also one of the richest in the world! 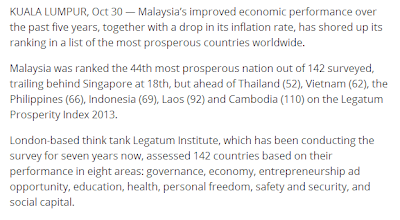 Too much good news to digest?

Well, don't worry, there's plenty of not-so-good news as usual. Try joining Ong Kian Ming's twitter for his latest crusade against how much some Malaysians are paid by the Government. Critical pro-government blogger Syed Akbar Ali also has the posting with the long heading Pemandu Director RM49,000, Assistant Director RM31,600, Senior Manager RM21,000, CEO Inovasi RM69,000, SPAD RM58,500, CEO Talentcorp RM35,000.
Generally, I agree: these people should not be getting more than the Ketua Setiausaha Negara or the Cabinet Ministers. But I don't think we should expect our top CEOs to take home RM20-30k a month lah. Therefore, I suggest we increase, with immediate effect, the gaji dan elaun of the Chief Secretary-General to the Government. A notch below Singapore's level would be fair. This should be followed by the pay and allowances of top civil servants, including judges, generals, top cops, teachers, government doctors, etc. We are the 44th richest country in the world, thanks also to these civil servants - their salaries should reflect that. No?

Read also YB Ong Kian Ming "nakal" by a Pemandu blogger who advises the PhD holder to Google more. He also quotes Dr Mahathir's famous line when told that Anwar Ibrahim has been appointed Selangor Economic Advisor with a salary of RM1:

You pay PEANUT you get MONKEY....one of newton law

OMG, SPAD being paid 58K per month but service still like shit. Rocky as usual, if Malaysia is not the worst, it is acceptable.

One argument from me.

Are the well being of the people, I mean by the state of public transport,, education or health care - is it at the level of what a 44th rich nation should have?

If not, then no top civil servant deserves such a pay packet.

To "ah lee" sou said You pay PEANUT you get MONKEY - so do you think if we give "cashew nut" we will get a better monkey ?

Well, there was thing called SBPA in 2011 where all the top civil servants are to be handsomely paid (KSN would earn up to RM60k a month) but they will be put under an annual contract instead of permanent. But those idiots at CUEPACS kecoh because a driver could only get a raise of RM5 a month. Go figure.