Intentional spill. You'd think the jokers would set aside their differences to overcome the crisis together, right? Wrong. The taps at your home may still be dry. but the state exco are patting their own backs and shifting the blame on others. No can do. YB Eli has to buck up and take a series of actions (which she should have taken earlier) NOW!
Read this: 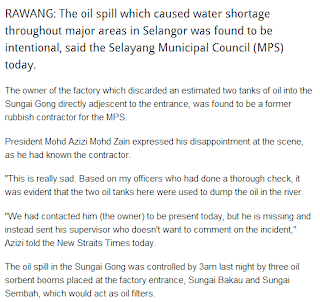 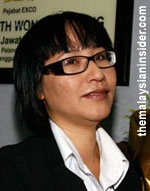 Yes, after a thorough check (quoting the council chief), the spill wasn't accidental but INTENTIONAL. It was done on purpose, with mala fide, and if you ask me the guy should be charged for ATTEMPTED MURDER.

Elizabeth Wong's blow-by-blow explanation somehow excluded the intentional/sabotage fact altogether. She also missed mentioning it in her interview with the Malaysian Insider; she seemed more interested in slamming Syabas for triggering the Red Code alert, saying that Syabas had misinformed the public.


"Is it a water disruption? Yes. Is the spill massive? Yes. Is it a crisis? No. Because we began managing it by yesterday evening," Wong told the Malaysian insider. - Exco says water supply resuming, slams Syabas for causing panic

We are not interested in the continuing Pakatan vs Syabas never-ending squabbles. Save that for another time. Lives are at stake here, for heaven's sake! The factory that was responsible for the "spill" is said to be operating illegally (and the MPS president even know the operator, see story above).

Why are illegal factories still operating? What have the state government been doing all this while? These are the issues that should be addressed, NOT if a Red Code alert was triggered or not.