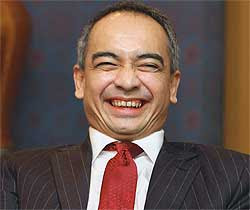 Lim urged Malaysians to emulate Nazir in speaking their minds despite the risk of backlash.

“I hope his brother Prime Minister Datuk Seri Najib Razak can be just as brave as him ” he said while condemning a news article in Utusan Malaysia that had labelled Nazir as “anti-Malay” for his praise of Azran. - TMI

CIMB big boss Nazir Razak is now, officially, the darling of Pakatan Rakyat. He is hailed as a new hero for coming out to praise AirAsiaX CEO Azran Osman Rani for his anti-Malay, anti-Umno stance. Nazir has even won the adoration of DAP's Lim Guan Eng, who urged Najib Razak to try and be as brave as his little brother, and Zaid Ibrahim.

Some will ask if there is more than meets the eye.

The one certainty is the label of “kacang lupakan kulit” will stick forever. Many will say he is where he is today because he benefited from NEP, because he has strong ties in Umno and because of his linkages with the party top leadership. So, why is he so prepared to be seen as anti-Malay, anti-Umno and along with that, inflict the unkindest cut of them all on his own brother, the PM?

One theory is that Nazir is buying political insurance to stay relevant in the event of an "Ubah". Never mind that it could be by street violence. It has been said a corporate man is always keen to see an easier passage for his company or business's quest for profit, profit, nothing but profit. It does not matter who is the government of the day so long as he covers both sides. This sometimes can lead to spilling the beans to stay alive if there is a new power in Putrajaya.Today, given the political landscape, Nazir may be out to buy insurance. Even if the premium happens to show one is anti-Umno and anti-Malay by supporting Azran.

In the avalanche of criticisms against Nazir for biting the hand that fed him, many think he has become a liability to Umno and his own brother. Read Malay NGOs slam Najib's brother for backing AirAsia CEO.

p.s. I hope Nazir doesn't get carried away by Guan Eng and Zaid's praises. We know they'll use anything and anyone to get at his brother.
at June 13, 2013