Why there won't be a "tsunami" this time around 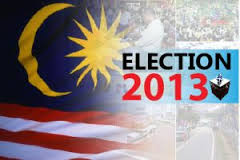 You can feel it in the air. Back in 2008, there was a creeping national anger directed at an administration that was sleeping on its job. It was a powerful catalyst, more so because the anger was felt and shared by political rivals and, more potently, by those who were not aligned to either the Opposition or the Government.

Today, a fortnight away from the 13th General Election, 5 years after the historic March 3 2008 outcome, that feeling is not there anymore. The Najib Razak administration has not been sleeping on the job. He's brought improvements, major positive changes, and reforms (transformation is his preferred word) since taking up office in 2009 by pushing very, very hard. Even the tireless Dr Mahathir Mohamad concedes that his successor's successor probably works harder than he did when he was PM.

Back then in Sleepyland, you had Dr M working hard against the BN government led by Abdullah Ahmad Badawi for reasons I know we all who were involved then remember but which I shall not discuss for good manners. Also, the bloggers were being isolated, sued, jailed, ostracized, circumcized, etc. RPK, Jeff Ooi, Rocky Bru, Sheikh Kickdefella, Big Dog, AKJ, Nuraina Samad etc .. Ah, all the troublemakers! Even the newbies back then, such as Haris Ibrahim and Zorro who later became big pro-Pakatan bloggers, were part of "us". These bloggers all and without exception rallied behind and beside - who else? - Dr M. The pact was influential, forceful, and again very potent. (The likes of Papagomo, Parpukari, and the UMB bloggers and the Komtar cybertroopers had not been born; when they came, they changed and enriched the landscape further).

Today, Dr Mahathir is working hard FOR the BN government. And the BN government hasn't been demonizing him like it did before PRU12. In fact, even before Najib announced the PRU dates, the former PM was already firing scuds into enemy territories, earning himself a legal suit threat from Lim Kit Siang, several police reports, and a whole new huge following.