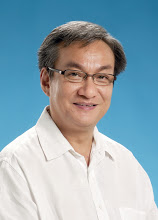 Neither MCA nor Umno  "own" Wangsa Maju, if you ask me. YB Wee Choo Keong is the incumbent and serving MP for Wangsa Maju. In 2008 he defeated the BN candidate from MCA by a 150-vote majority. It might have been one of the slimmest margins but if one considers that Wee 1. was not a PKR member even though he contested on their ticket; 2. the DAP hated his guts; and 3. he was not PAS-friendly even though he was born and raised in Kelantan, then Wee's victory in Wangsa Maju 5 years ago had defied the odds.

He's been serving the constituency well and the people of Wangsa Maju like him and know they can depend on their MP. In Parliament, Wee has been vocal and is a critic of both BN and Pakatan. He even helped lead a cyber campaign that got Najib Razak to reverse a controversial deal brokered by Khazanah which would have let Air Asia take over Malaysia Airlines, the national carrier.

Yesterday, where the angels from BN dared not thread, Wee questioned both Lim Guan Eng and Ambiga S over what needed to be asked. Read the paper cutting below and tell me if the BN or MCA aspiring candidate for Wangsa Maju has the gumption to take on those two?

KEEPING SILENT: He has failed to act fairly to delegates who were not notified of the CEC election, says former MP

KUALA LUMPUR: FORMER Wangsa Maju independent member of parliament Wee Choo Keong has  asked DAP secretary-general Lim Guan Eng  to step forward and explain the party’s election fiasco.
Wee said Lim had  failed to take the necessary steps to act fairly give justice to all the DAP  delegates who were not  notified of the central  executive committee  (CEC) elections, especially the 735 Indian delegates who had been demanding for an explanation.
“I have come to understand that  he is scared that the Registrar of  Societies (RoS) will interview the 735  DAP delegates who were not in formed about the CEC elections on  Dec 15.
“We want to know why he is still reluctant to present the name  list of names of the 753 who did  not turn up and the 1,823  delegates who were present,” said Wee, who is also DAP’s  former DAP national  publicity secretary.
He also questioned  Bersih co-chairman  Datuk S. Ambiga’s on her silence onregarding the issue and  for not defending the  plight of the over 700 Indian delegates that were passed over by  Lim.
“Is his act clean or  dirty in Ambiga’s eyes?”  he questioned, adding  that  Ambiga  should issue a public statement  if she fully supported his  actions.
“If RoS ordered that  Lim conduct a re-election and ask all 735 Indian delegates  to be present and vote, would  Ambiga protest?”
Wee said he was confident that Ambiga  would protest a re-election as it would affect  Lim’s position and give other Indian candidates an opportunity to  win.
Meanwhile, In Tampin, a former DAP leader  has also asked why Ambiga did not  take an interest in to investigate  DAP’s CEC’s election fiasco.
Tan Tuan Tat, who is the former Selangor DAP publicity  secretary, was perplexed that Ambiga,  who claimed to champions  clean and free  elections, had never  questioned the party  which often was proud of its  competency, account ability and transparency (CAT) practice.
“Ambiga is always  challenging the Election Commission to be  fair and just.
“So, why didn’t she ask DAP secretary-general Lim Guan Eng about the party’s 753 delegates who  were denied of a chance  to vote at the party’s recent CEC election?”
Tan was speaking at a dinner meeting with DAP Ladang Regent branch mem bers at Balai Raya Ladang Regent in  Gemencheh, here, on Wednesday.
He felt that if Ambiga was really  serious about competency, account ability and transparency, then she should  have challenged the DAP to reveal more about the its CEC’s election fiasco.
He said the public should not  blamed others if the Registrar of Societies (RoS) decided to de-register the party or make it called for a  fresh election, thus not allowing the party to use its logo infor the general  election.
“Do not blame the other political  parties or their rivals. They should instead look at point to the DAP leaders who  decided to change the election results after the CEC results were out and claimed that there was a technical glitch by the computer,” he added.”
A total of 2,576 DAP delegates  should have been present at the election to select 20 of the party’s CEC  members, yet 753 of them did not  vote.