The Undesirable Immigrant.The article I'm attaching below was sent to me by a very learned informant and is reliable and impeccable. It is hoped that his detailed explanation of how the laws work (and who Nick Xenaphon works for) will help all of us understand why the Government had no choice but to bar Mr Xenaphon from setting foot into this country. 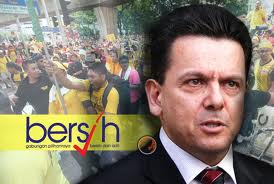 Immigration Act 8(3) ... bars “any person who is a member of or affiliated with any organisation entertaining or teaching disbelief in or opposition to established government” or/and “any person who, in consequence of information received from any source deemed by the Minister to be reliable, or from any government, through official or diplomatic channels, is deemed by the Minister to be an undesirable immigrant.”

The detention and deportation of Independent Australian Senator Nick Xenophon in Kuala Lumpur’s LCCT terminal has enraged the opposition, prompting Datuk Seri Anwar Ibrahim to condemn the actions taken by the Immigration Department as a “gross abuse of power.”

Immigration Department chief Datuk Alias Ahmad said that Xenophon, who came to Malaysia to meet Anwar Ibrahim and several Election Commission (EC) officials, would be deported because the senator had allegedly tarnished the image of Malaysia. Australia’s Foreign Minister Bob Carr issued a statement calling for the swift release of Senator Xenophon, and expressed disappointment over the situation, reflecting on Australia’s strong diplomatic relations with Malaysia.

Xenophon was part of a seven-member international team of election observers invited by opposition leader Anwar Ibrahim, who claimed that the expenses allocated for the fact-finding mission were borne either personally or by their respective governments; the other members of the team have since cancelled their visit to Malaysia. Xenophon expressed concerns regarding issues pertaining to electoral reforms and criticized the government’s crackdown on street protests as “authoritarian” in nature.

Immigration Chief Datuk Alias Ahmad stated that Xenophon was barred from entering Malaysia under the Immigration Act 8(3). A closer look into the stipulations of the Immigration Act shows that Xenophon’s deportation was legitimatized either through clause J, which bars “any person who is a member of or affiliated with any organisation entertaining or teaching disbelief in or opposition to established government,” or clause K, which blocks the entry of “any person who, in consequence of information received from any source deemed by the Minister to be reliable, or from any government, through official or diplomatic channels, is deemed by the Minister to be an undesirable immigrant.”

The state’s official explanation was that Xenophon’s deportation was “a result of his participation in an illegal street protest in Kuala Lumpur last year,” referring to stipulations in the Peaceful Assembly Act which bars foreign nationals from taking part in unauthorized street protests.

Some activists who took part in the Bersih demonstrations have expressed their discontent over Xenophon’s deportation through social media; others see the issue as another example of the opposition inviting foreign interference into the nation’s political affairs.

Anwar Ibrahim has previously appealed to the Australian government to monitor the upcoming general elections in an attempt to ensure their legitimate conduct, inciting harsh criticism of the opposition leader, who was thought by many to be falsely equating Malaysia’s electoral standards with that of Afghanistan, Iraq, or the Congo. In response, Australian Foreign Minister Bob Carr refused to send observers, stating that Australia cannot and will not influence how Malaysia’s elections are run.

Members of Barisan Nasional have addressed Ibrahim’s ties to US Government-linked foundations such as the National Endowment for Democracy (NED) in the Malaysian Parliament, and journalists have also uncovered letters written by Ibrahim, which were addressed to NED President Carl Gershman in Washington D.C. discussing the deployment of election observers to Malaysia.

Xenophon, an independent senator from South Australia, has spent much of his career highlighting social ills associated with Australia’s gambling epidemic and fighting for farmers rights by calling for major Australian super markets to offer pricing transparency.

It is unclear what prompted Xenophon to illegally participate in the Bersih 3,0 rally, but his deportation is a sign that the Malaysian Government isn’t afraid to be bold in expelling those seeking to downplay the legitimacy of the Electoral Commission, even at the expense of a potential diplomatic row.

The Electoral Commission has provided logical and consistent refutations to the allegations of electoral discrepancies made against them on numerous occasions. As Malaysia draws nearer to GE13, it has become self-evident that members of the opposition are attempting to leverage electoral discrepancies for their own political gain, with the hope of disparaging their political opponents in the ruling party.

To date, the parliamentary select committee has addressed the concerns of civil society groups by passing 18 amendments to the electoral roll, and the United Nations has confirmed that Malaysia is completely in-line with international norms and electoral standards.

Xenophon studied law and obtained his Bachelor of Laws in 1981 before establishing his own law firm; if Xenophon sought to participate as an international observer in Malaysia’s elections, he should have not taken part in illegal street rallies in this country, and he should have adhered to the stipulations required within Malaysian law by applying to be a recognized observer.

EC chairman Tan Sri Adbul Aziz Mohd Yusof recently stated, “To date, no foreign observes have applied to come. Besides, there must be an application from an international observer who intends to watch the way our polls are conducted before being chosen.”

It is a basic prerequisite in line with international norms that any individual acting as a foreign electoral observer be completely independent, nonpartisan and holding no affiliations with any political party. Many may feel that the senator’s deportation was an unjustified abuse of power, but the fact is that Xenophon was invited to be an electoral observer by Malaysia’s de-facto opposition leader while skirting Malaysia’s peaceful assembly act and laws that required him to formerly submit an observer application, effectively going against the Australian government’s own refusal to take part in observing GE13.

The opposition has continually attempted to mislead voters by crying foul over the electoral commission, even when Pakatan Rakyat cleanly took five states in the 2008 elections. Before talking of living under “authoritarian” rule,

Malaysians should also not forget the long reach of deportation power in Australian law, which routinely grants persona non grata status to non-Australians for minor offences. Xenophon’s deportation is an unfortunate incident, but foreigners are required to abide by Malaysian law if they wish to have some kind of presence observing elections or staying in the country, otherwise, it is perfectly acceptable for the authorities to take action in safeguarding political affairs from intrusive foreign elements.
at February 17, 2013