See updates at the end of the story ..

First, this Deepak claimed he gave RM8 million to Rosmah. The amount kept growing since that,  for effect. Today, at a press conference, PKR's Rafizi claimed Deepak bought RM13 million worth of gems, diamonds and jewellery, allegedly for Rosmah.

Likewise, first, Anwar Ibrahim said the Opposition was NOT involved with this Deepak fella. But today, dropping all pretense, his boy Rafizi went and held the press conference to perpetuate the Deepak-Rosmah at the PKR headquarters! 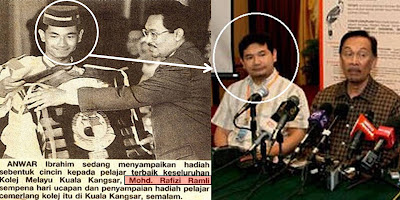 I can go with the inconsistencies and "holes" usually associated with lies (and propaganda) but what's the point? Some people will believe in what they want to.

Like you people believed in PI Bala's first statutory declaration (issued at a press conference together with Anwar and other PKR leaders, remember?). The way you used to believe RPK even when he wrote unbelievable things, like when he swore that Rosmah had personally supervised the killing of Altantuya. And some of you believed that Rosmah bought the RM24 million diamond ring even after it was proven that the ring had come in and then leave the country. Remember the "shopping spree in Perth" story by the Australian newspaper? You gullibles embraced the news without doubt and wanted it to be true, even after the newspaper had admitted its mistake and it was proven that the PM's daughter was not even in Perth at the time.

The good thing is, ladies and gentlemen, the truth will always prevail. PI Bala proves to be a very shady character and Altantuya was not even who the Opposition made her out to be. RPK has clarified that he did not actually say Rosmah was there, someone told him she was there! Of course it was the cue for you people to turn against RPK. You conveniently accused him of having sold his soul to the highest bidder ..

Well, we don't see your boss wearing the famous Omega watch, Rafizi. Are you trying to tell us something?

It is the recycling of the old perception game based on outright lies and half-truths that got Pakatan an unprecedented amount of votes during the 2008 general election. Except that now instead of PI Bala, they have Deepak and instead of RPK, who has become a liability to Anwar and the entire Opposition, they have Rafizi.

Will voters fall for the same trick, five years on? The most gullible ones among you will, for sure, but since PRU12 many people know better ...

Updates:
1. Check out Rafizi's "evidence" to link Deepak's alleged RM13 million spending spree on gems and diamonds 5 years ago to Rosmah Mansor. One word comes to mind and it starts with P ... Pathetic! 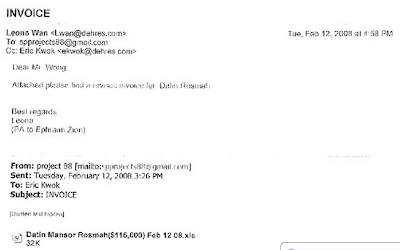 The Unspinners say "a Standard 3 pupil can come up with an email like this one". Question is, did Rafizi fake it or did he fall for a fake? Read it h e r e.

2. Deepak is a good actor or he REALLY doesn't know what Rafizi was talking about. Malaysiakini has the report originally headlined Deepak denies giving Rafizi the "diamond papers"
at January 02, 2013