UPDATES: For "Anwar wants Musa Hassan to join PKR, not PAS" and other revelations, please read Former IGP bombarded with questions of the past featuring bloggers from Gelagat Anwar to former Information Minister Zainudin Maidin. 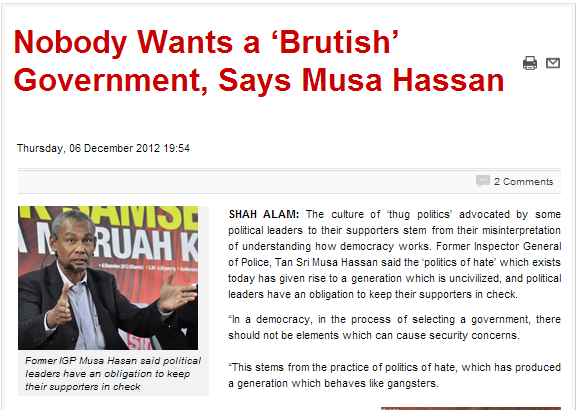 "... massive problems can occur when it is understood that a change of leadership can be done via a revolution." - Musa Hassan

Those who were hoping that the ex-IGP would continue to slam politicians in the ruling Government were absolutely disappointed yesterday. The Tan Sri stuck to the forum's topic and whacked all political gangsters. Not too far from where the forum was held, a prominent Selangor politician was threatening to dismantle traffic cameras in the state in a blatant display of power, something Malaysians have been seeing a bit too often lately.