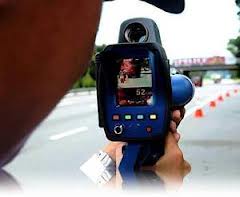 Best of roads, worst of drivers. The police ditched Ops Sikap for Ops Selamat this year to step up the management of traffic during the Hari Raya period. The stats were out yesterday. The IGP himself took pleasure to announce a decrease in the number of road crashes and fatalities during the two-week campaign.

But was Ops Selamat a success? Far from it. On the contrary, it's as bad as ever.

Qucik analysis of the numbers:

But - and this is a pain in the butt - the fact is that's not a real improvement. Previous years' records show a yo-yo trend in road accidents and fatalities -

The next year, it's down!

Every year the number improves, the police say Malaysians seem to be more aware of the dangers of reckless driving.

For example, in 2010 when the stats were good, you read this story: 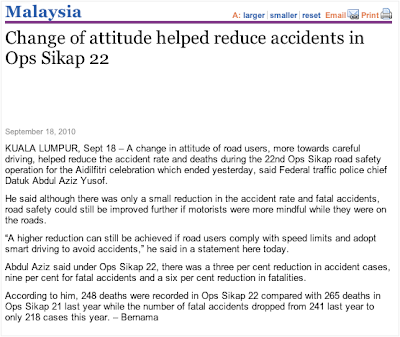 Same thing today, the news attributed the lower number of accidents/deaths to the motorists' "better attitude":


My point is, from Ops Sikap to Ops Selamat, things have NOT really improved at all. We are still killing and maiming one another by the thousands every festival. Since 2001, the average number of fatalities during Hari Raya hovers well over 215 (read this 2009 analysis in Nut Graph). Motorcyclists still make up 63-65% of the deaths. Nothing has changed. Malaysia has the best roads but the worst drivers, full stop. The IGP said it: our drivers behave better when watched. But if the cops have to watch those motorists all the time, who's going to keep an eye on the crooks?
at August 30, 2012