Konrad AS, allegedly pro-Anwar, shut down in UAE

You may remember on March 22 The Mole published Konrad Adenauer Stiftung/Foundation's denial that it was backing Anwar Ibrahim's ambitions to become Prime Minister of Malaysia. This followed allegations on blogosphere that KAS was interfering with our domestic politics, especially by bankrolling pro-Anwar groups or even Anwar himself in the run-up to the 13th General Elections.

Well, yesterday the government of UAE decided to close down two NGOs in that country and one of them is Konrad Adenauer Stiftung! 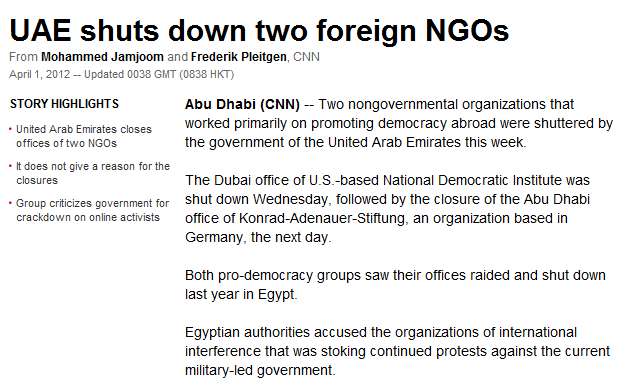 The shutdown, to me, is enough reason for Putrajaya to conduct an investigation into what really are some of the foreign NGOs up to here in Malaysia. I have nothing against foreigners or foreign elements or foreign influence etc, I just don't want some of them to think that we are so dumb that they can do as they like, even sabotage our hard-earned peace and prosperity to fulfill their own agenda.
at April 02, 2012

I suppose that it would be irrelevant to mention the provenance of Egypt and the UAE, is it?

Both are not exactly shining icons of democracy, women's rights and religious freedoms, are they?

It's interesting how the UAE, with it's billions in oil revenues and financial reserves, feels threatened by a foreign NGO with comparatively piffling funding.

While continuing to rely on the US security umbrella to protect itself against a rampant Shiite Iran!

It is the Minister oh Home Affairs Hishamuddin Hussein who is the dumb ass. I think the US Embassy can call him anytime and tell him how to tie his shoelaces.

We all know these NGOs are up to no good. I sometimes wonder if Hishamuddin is also part of their game already? Who knows.

They are in in fact Very much governmental 'non-governmental' organisations.

"I have nothing against foreigners or foreign elements or foreign influence etc, I just don't want some of them to think that we are so dumb that they can do as they like, even sabotage our hard-earned peace and prosperity to fulfill their own agenda."

These Arab Dictators and Islamic Dictatorial Fundamentalists are now Paranoid of any foreign organization that tries to Open the eyes of their people....

Are you promoting Dictators and Raja Arabis????

how thick can you be? the point here is sovereignty

you wont want US to tell china what to do right?

if plundering is to continue, there cannot be dissent

Spot on Syed Akbar Ali. Treachery runs in that family's blood. One of them worked with British intelligence to fuck the Palestinians. You know who. So no suprises if the latest bastard on the scene joyrides with the Jew arselover.

SAA, you are damn right. If there's anyone to blame, don't look elsewhere but at Hishammudin 'pengecut'. Why be Minister of Home Affairs if you don't have any courage whatsoever! PM Najib, please wake up, your cousin is taking your party down the drain.

Maybe that's why 1 Singapore Dollar is worth 2.43 Ringgit!

Stupid theories need to be debunked!

You said - some of them to think that we are so dumb they can do as they like, even sabotage our hard-earned peace and prosperity to fulfill their own agenda.

Is not Utusan Malaysia doing that right under our noses?

The point is, these foreign NGOs are up to no good. They want to destablise any country that is developing or striving to develop. It is part of their 'divide and rule' agenda.

It can be clearly seen but our Government fell for the trap, fearing being labled undemocratic.

The opposition took full advantage of the weak government and their head grew bigger than their shoulders.

This is where the ISA should be used, not banned.

To be honest, what benefit does a chaotic country enjoy? Of course it benefits these sort of NGOs. They will then appoint their proxy with dubious character to run the divided country. In return, these leaders will be blackmailed as compensation.

So, can the voters still not see it? The Government obviously cannot see it. Hopefully the voters may see it though.

true democracy...that's what malaysia trying to conduct...to please the so called human right movement... NOT the right of Negara and Rakyat!

he..he.. end of the day its all about power and money!

Bro rocky ..do you know that members of psc on electoral report headed by dr max ongkili visited konrad adeneur stifftung in germany last month? wow they also getting help from jews !!!

Some people are so so not patriotic at all.. Better ship them out to their ancestral place la rocky
When it comes to foreign intervention we should be defending our nation.. But these so called citizen of Malaysia are so so fucked up..
In their heart is blackened with pure hatred..
Why not we ship them out?

If that's the case, then the Malaysian government should not have joined the Asean initiative to pressure Myanmar into holding "free and fair" elections?

Isn't that overt interference in Myanmar's internal affairs?

everybody knew that anwar is only puppet for DAP.

what DAP means? no not Democratic Action Party