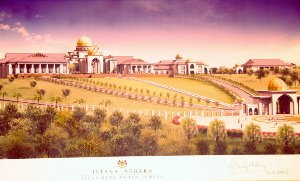 Last I wrote about the new palace for Terengganu, work was on-going and the cost had escalated to more than half a billion ringgit. Current status, same sources told, work on the istana is still on-going and the cost is fast approaching RM1 billion. Something is really wrong here. When construction of the palace was approved, the previous Menteri Besar had put a cap on the cost (the Agong's palace in Putrajaya had just been completed at less than RM100 million then), Current MB Ahmad Said was aware of this.

In 2008, Ahmad Said was made MB courtesy of the Palace. Many had expected Najib Razak to "correct" this mistake by the previous PM but he, instead, allowed the status quo to run its course. Perhaps that was a fair thing to do but come PRU13, Ahmad Said must not expect the palace to be able to back him again. And if he's not careful, there may not be a state government for him to aspire to run after PRU13!

Ahmad Said must be able to deliver as well as his predecessor Idris Jusoh did in the 2008 general elections. But at the rate things are going, this will be a tall order. It certainly isn't looking like a walk in the park for BN/UMNO in this East Coast state. Idris is deeply frustrated by the way things have turned out and has said he would not contest in the next general election. Some observers thought Idris was paving the way for the old guards to give way to new blood in BN-UMNO, but his supporters say Idris is disillusioned.

Najib has a lot of work to do from now until the GE to make sure Terengganu does not fall to his political rivals. The PM can start by demanding his MB to explain why the new Istana is trying to cost nearly as much as the new Istana Negara! One thing will lead to another ... and another.
at February 17, 2012