The Ten Conditions re weapons, hailers, etc For a Rally 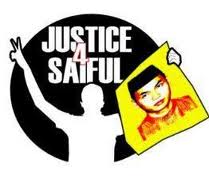 Fire and Rain (is umbrella a weapon?): Tomorrow's KL weather, here
Many people say our police have gone mad for allowing tomorrow's protest to take place but I think this is a good compromise, really. The organenisers have promised a peaceful rally and I don't think after Bersih 2.0 we want to see adults behave, and be treated, like kids again. The keyword "peaceful" assembly and the onus is on the organisers AND the police to make sure of that. I have taken part in some peaceful gatherings myself and I know that cops don't like to have to go after protesters, unless they really have to. They have set 10 conditions for the organisers and protesters to follow:

p.s. For those who have just returned from outer space, the Free Anwar Campaign does not imply that Anwar is in jail. He has been a free man since a former aide Saiful Bukhari Azlan in June 2008 cried sodomy. After more than 3.5 years [read He resorted to all legal avenues - NST today], the Court finally reaches its verdict tomorrow in KL. Many people, particularly his supporters and comrades in Pakatan Rakyat, expect Anwar to be found guilty and go to jail for sodomy.

2. No sound equipment. except loud hailers (seen no 3), is allowed

3. Only TWO hailers will be allowed for the organisers to manage the crowd

5. The organisers must ensure that participants do anything, eg making noise or signals, that could disrupt the court proceedings

6. The area for the gathering is limited to the parking lot along the left side of the main road into the court (est max capacity 5000 pax). The area will be marked by a police line and participants are not allowed outside of it. If the area is filled other particpants are not allowed in and they will be dispersed from the area

7. The organisers must make sure that participants do not bring any weapons and give full cooperation to the police to conduct checks if required

8. The organisers must ensure that all parcipants leave the rally no later than one hour after the court verdict has been delivered

9. All orders by the police, which would be given from time to time, to ensure peaceful assembly must be adhered to

10. Paricipants are not allowed to vandalise or damage any public property or any private property in the area