Senai, not a royal airport anymore 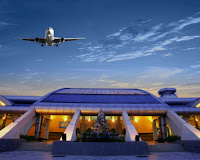 Since it opened in 1974, Johor's airport has been known as Sultan Ismail International Airport. Not anymore. A week or so ago, the airport's authorities were told to stop using the name and to use Senai International Airport for all intents and purposes. They claimed to have been given 24 hours to do that. The orders came from the Menteri Besar's office but the real orders came from elsewhere, or so it seems.

Senai, named one of the region's best emerging airports last year, is run by a group within Syed Mokhtar al-Bukhary's empire in Johor, which includes the Port of Tanjung Pelepas. Almarhum Sultan Ismail was the grandfather of the reigning Sultan of Johor.

Strangely, you won't find any statement about the hurried name-change in the local papers or the Internet ...
at January 19, 2012