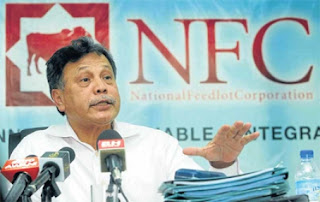 Original article
Taking the bull by its horns. Ah, so it was a loan and not a grant! Read ".. the bull claims better stop" [NST, 18 Nov]. That is a relevant point and would have changed the way a lot of people perceive the National Feedlot Company. And in this country perception is all important. The truth will always prevail, but only later. Sometimes much later.

Question is, has Salleh Ismail waited too long to respond to be accusations levelled at his wife, YB Shahrizat Jalil, and his children (all 3 kids were brought into NFC to help him run the company)? Some people think so. I am a believer that it's better late than never. Of course the longer you wait the harder it is to convince people.

But now that the NFC has come out to engage its critics head on, the process of establishing be truth can start in earnest. Salleh said the NFC is looking at legal action possibilities against some Rafizi and Saifudin. That is to be expected. We can expect the authorities to start grilling Salleh and the NFC. For example, the decision to use the soft loan to buy those condos. Is it legitimate or does it contravene with the terms and conditions of the loan and the contract? If it contravenes, does it fall under CBT or something more serious?

I'd rather not speculate. The investigation into NFC shouldn't take long. The facts are there, all audited. In fact, it was the Auditor-General who drew our attention to the state of affairs in the NFC. It would be silly to suggest that Najib Razak would try to sweep under the carpet what he, in the first place, allowed to surface in public domain.

p.s As for the title of this posting, it has to be placed on record that YB Khairy Jamaluddin has been at the forefront in defending the NFC, ie Shahrizat and family. There's good and bad to this. On the upside, we see an Umno Youth chief who is willing and able to defend a fellow Umno leader. The downside is, he's turned this completely into a political circus. Some even said he's got vested interest in KFC. On her part, Shahrizat didn't help matters when she told reporters the other day that there were people out to bring down Wanita Umno by taking her down. When the pro-Opposition news portal committed that terrible misreporting (something about her kids deserving the project when what she said was "her family didn't deserve the attacks"), she should have asked for an apology. It would have helped with perception.
at November 18, 2011

Email ThisBlogThis!Share to TwitterShare to FacebookShare to Pinterest
Labels: Thin