They suspend Mano for six, but Guan Eng gets off scot-free? 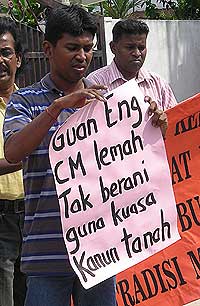 Racial discrimination? Eric Woon, the I am a Malaysian blogger based in Singapore until very recently, says it is clear as day:

Here are the facts … 2 fookups … 2 apologies … 1 suspension. What lah DAP, you are a racist party indeed! Discrimination seems to run deep with this Daddy Anak Party.

Eric Woon's posting DAP is racist. No two ways about it.

K. Manoharan, the Hindraf rep in the DAP, was suspended six months by the party for his 16/9 call to replace the Jalur Gemilang. Guan Eng has apologised to the Sultan of Johor for disparaging remarks made against the state when he was in Singapore recently but no suspension. Mano's ex-Hindraf pals outside DAP, especially those in the Human Rights Party and Makkal Sakti, are furious, H E R E.

Guan Eng and DAP better be careful. Back in PRU12, these Hindraf elements were very influential and PRU13 just round the corner ...

p.s. At last., a practising journalist has demanded an apology on her blog from Guan Eng's office for the foot-in-mouth by his junior press secretary, H E R E. Not very hopeful, though ...
at October 02, 2011