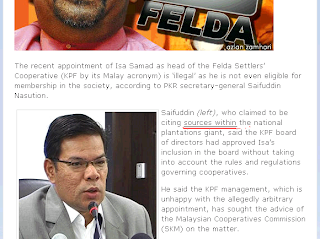 As expected, they are now going to try and scuttle the plan to take Felda and 112,000 settler families higher through the listing of the plantation giant, as announced by Najib Razak in his Budget 12 last Friday. The plan, in a nutshell, will make Felda a global player in both upstream and downstream sectors, and enrich as well as empower the settlers.

Apparently, however, not everyone in Felda will benefit from the plan. Settlers, yes. Their families and children, yes. But not everybody. Saifuddin Nasution, unwittingly, has exposed some of these very few people who could lose out from Najib's grand plan for Felda. See underlined in red above.

Whether ISa Samad is eligible or not to head the cooperative is a question that will be answered soon enough. He is appearing in Soal Jawab at 11pm tonight with Ahmad A. Talib. Watch it.

And watch this space. We will follow the money and find out for you who the biggest losers in this winning formula for Felda are, apart from Saifuddin and gang.
at October 12, 2011