In Penang, 300 Malay protesters beat up Chinese reporters, according to MalaysiaKini 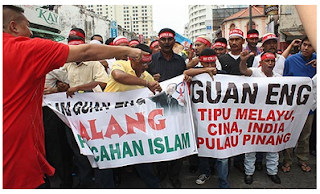 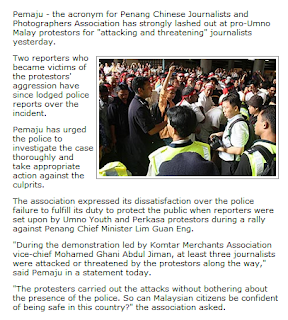 300 and 100,000. Malaysiakini reporter Susan Loone or Pemaju, the association of Chinese journalists and reporters, did not say if the reporters were injured so we have to assume they are OK, at least physically. This is the first time I have heard of Pemaju but I agree with them totally: journalists should be allowed to carry out their duties and the protesters should not have threatened them.
The reporters under Pemaju can count their lucky stars, though, as the demo in Penang was small - Malaysiakini says 300 people, and police arrested seven. The two rallies in Kuala Lumpuer expected on July 9 will be many times bigger. The one in Penang was organized by NGOs upset with Lim Guan Eng while the ones in KL - by Patriot and Bersih - are not. There were no clashes between rival groups in Penang and yet, as Pemaju now attests, it was VIOLENT.
If a peaceful march of 300 people can turn so violent,  as Pemaju says, think what we reporters in KL will be up to on July 9. PAS saja dah janjikan 100 ribu orang!
Journalists working on July 9, watch your backs!
at July 03, 2011

People shouldn't take everything from Malaysiakini as the truth. They are known to sensationalise issues that will make BN and their supporters look like demons. I was a regular commenter in M'kini until they banned me for retaliating to numerous comments from opposition ball-lickers. And Steven Gan went against his words/promise to allow me to come back after a month. It's been almost two months and M'kini still sees me as a liability to their agenda.

To Steven Gan, if you read this, I'm saying this to your face "YOU ARE A COWARD".

Hahaha. Leave it to the chinese, Susan "Loon" or the DAP to blow things out of proportion. As usual, folks, read the wordings properly. Three journalists were "threatened OR attacked". That's like the usual small cinapek clothing store that has an advertisements of "UP TO 90% OFF" when in actuality, the real sale is only 10% off and they cut off the price of ONE dilapidated blouse which has all the buttons missing by 90%.

As I said, leave it to the ungrateful semi-communists to blow things out of proportion and then try to portray "kekejaman regime BN" to the outside world.

By the way, accompanying those "police reports" are there any hospital assessments?

I was angry at all these Bersih thing initially, when this news came up. I HAD TO Laugh.

Journalism at it's worst. One sided writing 'DATU'. Sky got eye lah

Journalism at it's worst Datuk. Your story is with hidden agenda lah!!

Yes. I agree with Pemaju completely. The protesters shouldn't have beaten up journalists. They should beat up Lim Guan Eng instead.

Everyday I see my neighbour rotan his kids, just because did not finish their homework!

He sleep aloso got rotan under his pillow, kids make noise he rotan wan!

You fail to distinguish between some UMNO and KIMMA agent provocateurs whose main grouse is that after 40 years of NEP, they still need crutches and still cannot strike out on their own and on merit, and Bersih.

Isn't it telling that it was led by a certain Senator frog?

Be honest. Was there violence when you marched with Bersih 2007?

At which point did it become tense and threaten to boil over. Was it not when the "authorities" brought out water cannons?

Have you forgotten what our King's response was when our top cops hinted at tanks being brought out?

And for unelected Prime Minister Najib to say "Who doesn't know Ambiga. She's the one who threatened Islam," that's the height of racism and religious bigotry.

Lina Joy was entitled to legal representation by virtue of provisions in MALAYSIA'S CONSTITUTION. If it had not been Ambiga, someone else would have had to.

Ptuui to this humbug who claims to be promoting 1 Malaysia. That's over $100 million of hard earned Taxpayer's money down the drain!

We now have officially State sponsored racism, religious bigotry and extremism. PM Najib is fanning the flames of hatred and violence!

That alone justifies a hundred Bersihs!

dpp
we are all of 1 Race, the Human race

Fuck you Rocky.. really fuck you. Insinuating that reporters would be unsafe during the Bersih rally. WTF, do you think people that attends rally for freer and better government are bunch of loons like the UMNO goons? Seriously fuck you and I hope you choke on your beer, you mofo..

UMNO hoodlums masquerading as protestors ? Mamaks with a track record of trying to climb over a locked state assembly building ?

These clowns are so predictable. We will have 100,000 peaceful people; UMNO can't find 100 peaceful supporters. That's the difference.

Can someone explain why mamaks are so violent ? Is it due to the explosive mixture of Indian and Malay blood ?

Pemaju? sounds racist to me

It is not peaceful. Any logic decent human being know this is purposely demonstrated to show the violent and make future bersih look bad. Don't u agreed, you sell out blogger turn DATUK? Wht the objective of this demo to ask LGE to resign? It full of rage right? While the bersih is just a march to Istana and hand in a memorandum, right? Tell me, who is stupid enough to believe you anymore. I don't. Well maybe they are some. No wonder Malaysia has brain drain issue here.

Puk'mamakhirs, we WILL get you come the next GE. Unlike you racist supremacist we WILL not resort to violence.

One more thing. 300 typical no balls UMNO/Perkosa pondans beating up a hand full of reporters while being protected by the police.

Ezam is a leader of NGO? No UMNO youth or Perkasa involvement when its already reported and shown? You a blind blogger ke?

Maybe it was Hindraf people protesting in Penang. But Ezam don't look like one.

Dei, Thambi. Go check your eyes or brain. How you can become President of Bloggers Union with this type of blogging tricks?

lack of civility and a complete bunch of hoodlooms to say the least.
Shameless rent seeking goons - behaving in such unruly manners and a utter disgrace to the nation.
Penang under LGE is and will continue in the distant future ,an exemplary state ruled govt that not only penangites but Malaysians be proud of.

Haiyoyo Makyia, learn from what just happened there, who was finally voted in by the majority?

But these protestors are UMNO. The word UMNO is the real problem.

Can someone explain why mamaks are so violent ? Is it due to the explosive mixture of Indian and Malay blood ?

Can someone explain why the DAPs (I like my non dap chinese frens) are so terrible and arrogant people? Is it due to the constant stuffing of pig meat/tail/ears/snout/hoofs/shit down their throats?

Three journalists were "threatened OR attacked".

Salam Bro. Journalists should be beaten up by Bersih fellows. So don't complaint when you are beaten up.

the chingkies are descendents of coolie kang - uncultured, illiterate, disloyal, desperate and growing like weeds all over the world

vinnan 9:05 PM said...
Puk'mamakhirs, we WILL get you come the next GE. Unlike you racist supremacist we WILL not resort to violence.

Ya ya ya only talk big in cyberspace, act violent only, kena the gagah policeman, cabut kecut like his spelling errors

like they say - take care of your own backyard first

instead of barking (not biting) at UMNO in cyberspace

the caste system has zero human rights for the p****h

I think this pr is really a hypocrite.

Argue for freedom of assembly for bersih but deny Ibrahim ali and UMNO youth to assemble.

Argue they are peaceful coz they said it's non violent but argue IA and UMNO youth not peaceful despite the fact that they also claim to be non violent.

Argue bersih has right to demo but despise when people from Penang demo against guan eng.

I like what Marina Mahathir..daughter of Mahathir said..defending Amgiba.
You need to go to YouTube and view the video.
She is a real social activist.
She said..one word makes the government go frenzy...yet so many filthy words printed on T-shirts worn by drug addicts ...all ignored.
Even yellow colour is attacked.
This is worst than 3rd world mentalities...yet the government claims we are a developing country...marching forward towards to be fully developed.
Our govt is SICK SICK SICK and Rocky backside will stay smelly naturally with all his seat and shit...and only can be ordourless..after a good bath.
That's simple commonsense that Rocky seems to do not comprehend.
Dear Rocky ..I like Old Fart. fucking you.

Pity the Malays, their good name as peace loving race were tarnish when they blindly accept indian origins as one of their own. Only in Malaysia where an Indian can suddenly becomes Melayu. No wonder after decades of NEP, the real Malays are still left out while these new breed indian turns malay became richer with multi million restaurants, hypermarket and etc.

Judging by the intended message by the author, does that mean if Malaysians tomorrow organize a rally in downtown KL dress in Malaysian colors (just so happen to be Yellow) and smile, shake hands, giving handouts to the watching crowds. Greeting everone and wishing everyone to have a good and fruiteful day and the watching crowd reciprocate with good wishes, thumbs up and all. According to you inferences, with respect to the penang protest march, come July 9, the F & F rally will bring joy and happiness to the streets of KL (including the vendors that you inferred they will lose business).

So guys, what do you think. If what rocky said is right...easy to solve this impasse, right?

Sorry but I think you got to change the title. The MKini report states Pemuda and Perkasa not MALAY protesters. There is a huge difference. Malays are polite and peace leaving people.

Is this monsterball still wasting oxygen in this world?

Your time is up old man, nobody listens to you, not even your family.

So please talk to the plants in your Rumah Orang Tua Sri Kenangan where your ilks dumps their parents.

It's so so lonely isn't it?

Laaaaa
From the very moment their kids can recognize people, these Apeks teach them that Malays are "HANTUs".

Come to my place, I will show you one 18months old stupid looking AHKOw who will run and hide, shrieking and screaming away at the mere sight of any Malay passing by him! hahaha clowns in the making!

I see your point but one hardcore devil cannot be the same as a thousand angels.

Amongst mortals, this devils are call agent provocateurs and the bigger satan is the ones that employs these nast agents. Want me to elaborate further?

I just wonder what the KIMMA people were doing in the Perkasa & Pemuda UMNO rally. These so called MALAY sians are a misfit. They are supposed be put into the boat they came with and pushed into the ocean before they are allowed to further meddle with the affairs of Malaysians. These people are trying entrench into the rights of the true Indian Muslims (born & grown in Malaysia). In truth they are the true anasirs disturbing our peace. Most of them do not even deserve an inch of Malaysian soil to live on. With ill gotten citizenship and a roof over their heads, they have not stopped from trying to gain the 'Malay' status.Its time KIMMA keeps out of the Malaysian affairs. Go back and shout slogans from where you come.

hey mofo, u come to pg n tell the mamak pg to stop yelling hidup melayu. they're not even close la.