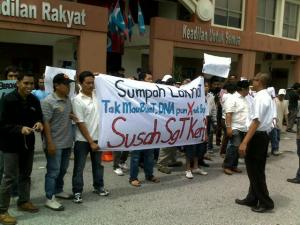 In Finally, It's a matter of Perception (read via Hantu Laut's tweet, with thanks), Raja Petra Kamaruddin says Anwar is losing the war and blames the PM wannabe's advisors.


The way the case is dragging on with postponement after postponement is setting tongues wagging. They are asking: why doesn’t Anwar get the trial over and done with? Would it not be better that we get to the bottom of this whole thing and once and for all resolved the matter?

The DNA issue is another matter that is confusing most people who are now asking what is Anwar trying to hide. They are asking: why not do a DNA match and prove once and for all that he is innocent? Maybe there is a legal strategy here that we are not being told about. But it certainly leaves a lot of questions unanswered.

Let me say it again: Anwar is losing the perception war. Many who used to curse Tun Dr Mahathir Mohamad in Sodomy 1 and swear that Anwar was being framed are not cursing Najib Tun Razak in Sodomy 2 and feel that maybe the allegation could be true.

Nobody knows more about the magic of perception and the so-called court of public opinion than RPK. He has weaved his magic not only for Anwar but for Ku Li, to whom he is still close, and Dr Mahathir. And if Pet or Pete had not been on our side at the right time (back in 06 when he was close to Dr Mahahtir and in 07 and the early part of 08) to try the previous administration, it might have been harder to take down Pak Lah and his band of merrymen.

Tomorrow, the Sodomy ll trial will listen to submissions with regards to the Prosecution's application that the Judge compel Anwar to provide a DNA sample. RPK's guess that "maybe there is a legal strategy (on Anwar's part) here" will be tested. In the meantime, however, Anwar continues to lose our confidence. People have been coming out to ask the de facto Opposition leader to get the trial over and done with. There was a gathering in Ipoh by a group of ladies yesterday and one more is being planned for 4 pm today. There is also one planned in front of the PKR headquarters in Tropicana, KL. (Pic above is taken from Big Dog's posting here).

But all these little political games are not important by tomorrow when the trial resumes. Another Brick in the Wall, who used to work very closely with RPK (and vice versa) before March 2008, has been reliably informed that there is, indeed, a strong case - and cause - to compel the judge to compel Anwar to go through a DNA match.

Bad news for Anwar's advisors. RPK is right: Anwar should have fought Sodomy ll as a legal battle or political battle, but NOT both.

Now, read A Voice: Sharkar on Judge's power to order for DNA sample.

165. The Judge may, in order to discover or to obtain proper proof of relevant facts, ask any question he pleases, in any form at any time, of any witness or of the parties, about any fact relevant or irrelevant; and may order the production of any document or thing; and neither the parties nor their agents shall be entitled to make any objection to any such question or order, nor, without the leave of the court, to cross-examine any witness upon any answer given in reply to any such question: