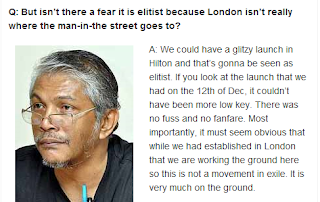 NOW EVERYONE CAN STAND. I'd recommend you read the Haris Ibrahim interview in the Star yesterday on Haris Ibrahim and Raja Petra "You're A Liar and A Coward" Kamaruddin's Malaysian Civil Liberties Movement. Seasoned journo Shahanaz asked some cheeky questions about gays, womanizers and Muslims who drink which, I must say, were mostly answered well by this unconventional lawyer.

I always believe that the "conversation" must go one, no matter which side of the political fence your plate's on.
at January 31, 2011