End of the road for Quasar, KFC chairman? 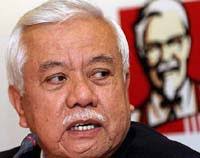 BURSA SPRINGS INTO ACTION. Ali Hashim, the Colonel Saunder's lookalike, may be in major trouble with the authorities if allegations against him are true.

Excerpts from a scoop by TnT:

"A leading corporate lawyer said, "With the revelation of a letter from the Menteri Besar of Johor datedd 29th November to Kulim saying it had no plans to sell QSR and KFC, Muhammad Ali's claims about an imminent sale of the two fast food operators appear to be an attempt to mislead investors.

“This looks like a classic case of creating a false market to drive up share prices so that syndicates can profit from the sudden share price surge. They then dump these shares, causing prices to tumble and unwary retail investors losing money,“ the source said.

“Evidence of Muhammad Ali’s manipulation is clear,” says the lawyer, who cites the letter dated Nov 29, 2010 showing Datuk Abdul Ghani Othman, JCorp’s chairman and the Johor Menteri Besar clearly stating that it (JCorp) did not want Kulim to dispose its stake in QSR Brands Bhd.