TBH: Porntip now says death was NOT 80 per cent murder but rules out suicide

No consensus. Two forensic experts have ruled our murder before this. So how did the poor guy fall to his death?

On Feb 19, 2010, Malaysia's pathologist Dr Shahidan Mohd Noor, who conducted a second autopsy on TBH last Nov after Thai pathologist Dr Khunying Porntip Rojanasunan said that there was an 80% chance that TBH's death was homicide, quashed that theory. 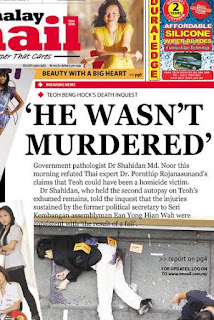 On April 26, 2010, UK renowned pathologist Prof Vanezis also ruled out murder, and said TBH was conscious when he fell to his death. 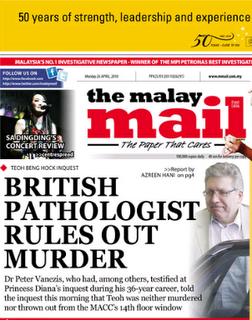 This morning, Dr Porntip, who is the pathologist engaged by the Selangor government on behalf of the family of TBH, told the inquest that Teoh's death was not suicide. 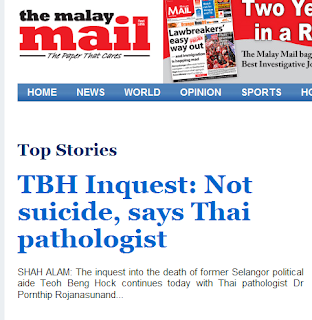 Dr Pornthip said she can no longer maintain the 80 per cent homicide percentage she had claimed before, but maintained from findings that Teoh's death was not suicide. Read The Malay Mail's report.

Dr Porntip had based that fantastic 80 percent theory on photographs or the first autopsy. Any fool could have guessed that there was no way she could maintain that 80 per cent homicide theory.
at August 18, 2010