The making of an Islamic state in Malaysia?

Updated, Sat 14 Aug 2010
But is it legal?
Answer: It is not legal for any state government to issue currency. That right is solely the Bank Negara's. Click here for details. 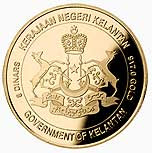 
""Islamic" currency. Has Kelantan usurped Bank Negara and the Finance Ministry? Is it en route to becoming a breakaway state?

Kuala Lumpur, Malaysia (AP) -- A Malaysian state is
allowing people to use gold and silver coins at stores and
restaurants to revive a practice from early Islamic societies,
an official said Friday.
The gold dinar and silver dirham coins provide an
alternative to Malaysia's currency, the ringgit, in
northeastern Kelantan state, which is governed by the
Pan-Malaysian Islamic Party, a conservative opposition group
that promotes religious policies in its rule.
The gold dinar was the official currency of Muslim
societies for centuries. The value of the coins used in
Kelantan can fluctuate according to market prices, but
officials say it remains a better alternative to currency
affected by the U.S. dollar and other foreign currency.
Kelantan authorities also say the use of such coins is
encouraged in the Quran.
State officials have produced coins worth about $630,000
for use at about 1,000 outlets in Kelantan's capital, said Nik
Mahani Mohamad, executive director of Kelantan Golden Trade,
which mints the coins.
"It's a great, great moment for Muslims," Nik Mahani said.
"We are providing an alternative means for the people to trade
with."
The coins came into circulation Thursday and can be
purchased at various locations in Kelantan. Their worth is
currently about $180 per dinar and $4 per dirham.
The state government also plans to give employees the
option of receiving part of their salary in this currency, as
well as introduce gold bars for large investments. Muslim alms
can also be paid with the coins.
The Pan-Malaysian Islamic Party has governed Kelantan since
1990. Some of its policies over the years include banning
gambling, nightclubs and rock concerts, and requiring Muslim
female state employees to wear headscarves at work.