Conspiracy theory:
"There now seems to be a concerted campaign to portray PKR as a party mired in deep internal trouble and I hope Malaysiakini which has been the leading new media over the last decade can exercise better journalism and avoid being manipulated towards that end." - Lateefa Koya, PKR's Info chief, in a Letter of Protest to Malaysiakini 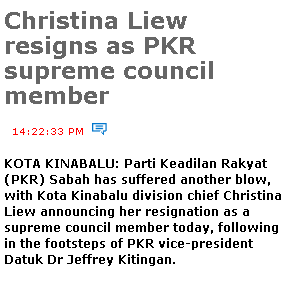 Anwar Ibrahim and Azmin Ali, of course) decided to go on two months' leave.
Then, Salehuddin Hashim is said to have quit the secretary-general post of the party.
Now, Jeffrey Kitingan said he quits as VP citing loss of confidence in the party's leadership.

To tell you the truth, some of the things I learned of party politics within PKR I get from Barisan Rakyat bloggers here and here who are very close to Zaid, especially. Nothing like getting it from the insiders. Still, Haris, I doubt that Anwar really said those words: "No way in hell will I have Jeffrey as chief".

When I want to know the nuances of Umno's internal politics, I read pro-Umno bloggers like Big Dog ad Voice. But when I want an outsider's point of view on blogosphere, I'll check out Reme's. His latest posting, PAS retak, PKR lagi teruk! is brutal.

This has proven that no one can work with Anwar.
Why did it take so long for them to find out?
Anwar is best left to himself.
He is president, deputy president, sect. gen, exco member and a member of a party of one.
PM-in-waiting??? What a joke.

Frankly I am at all surprised that Jeffrey Kitingan relinquished his position in PKR. Believe me this was not the first time he has done so and certainly it shall not be the last either. He is still looking for his lost "soul". What a pity!

Im a Sabahan and I never trust frog like Jeffrey no matter which party he jump to...

rocky,
its ok if u want to read the pro-Pakatan blogs to learn whats happening on their side. However, i would like to advise u n others not to leave any comment if u disagree with them or trying to point out the real facts about these people. U may however leave a comment only if u agree with them or think that they are Allah's gifts to Malaysian democracy. That is what i now call the freedom of expression - Pakatan style. As i told u the other day, i almost caused bernard khoo aka zorro's blood pressure to shoot over the roof when i pointed to him who he really is (i didnt use any vulgar words mind u - just that i think he is a bigot n a racist for specifically running down malay n muslim leaders (in BN and Pakatan)who promotes malays' n muslims' interests. Luckily the old man didnt die. After he angrily told me to suck my own beautiful furry tail, i decided to let the matter rest. After all, he is an old man and i think it is quite sad to see an old man spewing dirty words and behaving like a spoiled little brat just because not everyone agrees with him. U see, i was taught by my dear parents not to stay my welcome if the house owner have told me that i am not wanted in his house anymore(that is even if he is the one who put up an open invitation for everyone to visit his house in the first place). Well, i m not like those who come to yr blog and throw tantrums, cursing u and calling u names and then still come here poking their nose due to sheer addiction to yr postings. So, rocky n the others, please ya, heed this advice, Now more than ever - Pakatan is indeed in a mess - their bloggers are very touchy now.

Someone should hijack DSAI post, n bring DS WAWI as PKR president,
she even more credible as a president

What is the problem, million are waiting to take their place. Unlike the idiot UMNo that u rocky kaki bodek as though no one else can replace those idiot leaders in UMNO.
So what!!! there are many other talented Malaysian but surely not people like you Rocky special bru!!!

Oh, the usual denials will be wailing again.... small matter, personal views, misquoted by MSM and a dearth of other denials to brush things under the carpet.

If denials are not enough, blame UMNO/BN for it.

Just face the facts. The marriage of inconvenience amongst a band of thieves is unlikely to succeed.

The voters got emotional at the last GE by the hate campaigns engineered by one person to save his butt. PAS and DAP took the opportunity to jump on the bus driven by a disgruntled person who promised them the moon.

Then, when it came to sharing the loot, the story changes.

And now, as finances are getting low, the desperadoes are running like headless chickens.

Promises must not be made, unless it can be honoured. And heaps of promises were made during the elections to hoodwink everyone.

Well, there's more than meets the eye and it will be interesting to see how all these will be downplayed.

Anwar should come clean and explain to us who voted for PKR and Pakatan ....we are confused ...

It's a matter of time for PKR to crumble to pieces.

Anwar is not their messiah. He was never an option at all.

Anwar went to see Najib to cut a deal behind the back of his Pakatan Rakyat partners.

He wanted to save his own skin by promising Najib he will stop making Altantunya an issue and save himself on the sodomy case.

At first, he said he wanted to return to UMNO.

He offer to flee the country but promise safety for Nurul Izzah.

Najib would be crazy to do such a thing. That amounts to suicide.

Many in UMNO would skin Najib alive if he attempt to save Anwar. He will suffer the same faith as Pak Lah and Khairy.

I wonder where the anti establishment voices will go to after this.

Big cat
I defended you and I too got lashings from him.
He's a racist bigot, as I told him.
Old man who should have been a tuition teacher like most retired Ciku.
Most times, he deleted my comments.
He loves to hear people ampu bodek him.
Think of the many times he castigated commentators who are against him.
You are not the only one.
He's just a blog handler and acting autocratic.
What if he is a CEO or anyone superior?
He will just kick out the Malays and Muslims.
1Malaysia indeed.
1Chinese adalah.

I hope the main spokespersons for Pakatan will see thru what is happening in PKR. Zaid, Jeffery, Sallehudin and now Christina - all distancing themselves from the party. The lawyer Sulaiman excused himself from being Anwar's lawyer. Before after the 1998 fiasco, Zainur Zakaria excused himself from being Anwar's lawyer - after being found in contempt of Court.

All for what? All because one hoimo cannot get over sticking his dick in shitty places.

Is this who they are fighting for?

Cant they see that Anwar is doing all he can to delay the Saiful sodomy case? He is trying his best to run away.

This is what the Pakatan supporters are fighting for. Sodomy.

Garbage in, garbage out!

who is the fuck is christina liew?

who is the fuck is jeffery kitinggan?

what the fuck has they done for sabahan?

their leaving is a blow to pkr/pr?

no don't think so... for all we care they might and could only give a good blow job!

And by systematic dismantling & destroying MCA & MIC, UMNO aspired to be the only sole party to govern this country!

But no way Jose, we are not subscribing to UMNO shits!

We will still give Anwar 3 yrs to clean up his act and take over the administration.

The easiest way to entice people especially those who are so desperately looking for a new hunting ground, is by giving them promises that they would very much like to hear. People in that situation won't have a second thoughts about getting anything less than an empty promise. Don't they?

PKR is currently undergoing a process of exaggerated evolution. In any process there must be rule to follow. The rule of nature stipulated that only the fittest survive. And we can prejudge who exactly would be successful in getting itself transformed into a chameleon.

If you live by the sword, you die by the sword. SImilarly, If you go for arseholes, eventually you will get shit

PKR is a clean party, UMNO is a dirty party.
The writing is on the wall.

I thought there is no mamak in PKR?

Conspiracy? What about the battle cry about the right to speak, right to run amok and right to bull shit?

This Latifa fella should go back to the run up of the previous election where they simply shoot their mouths and call it democracy.

Where is press freedom? And this is not from the MSM, but some 'reliable sources'.

And, yet PR wants to rule?