updates:
By OutSyed The Box:

RNC proposes "international bloggers do". Raja Nong Chik, the Federal Territories Minister, has a vision of making KL a world class city that cares. "No point in having a world class city but the people are not happy. We can't fashion ourselves after Vancouver or Melbourne (because) there's just too great a disparity among KL folk. We have to address the disparity (first)," he told a group of bloggers over dinner tonight.

The Minister's aware of the need to overhaul the KL City Hall to make it more efficient. He got an earful from Syed Akbar Ali, the OutSyed The Box blogger, who spoke of the "little Napoleons" in DBKL and the tricks they are up to. [flashback Syed's open letter to RNC, here]. 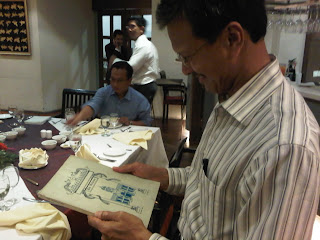 The minister said he is well aware of the complaints against DBKL. Before becoming the FT Minister in charge of DBKL, he recalled, "I climbed up the DBKL building at least 200 times to convey the needs of the people of Lembah Pantai (constituency).". He believes, however, that he can turn the 12,000 City Hall employees into assets.

We all wished good luck to him on that.

Towards the end of dinner, which was at Restaurant Halia, Sime Darby Convention Centre, KL, RNC offered to work together with Malaysian bloggers to organise an international or regional-level bloggers gathering.
Desiderata, three times chairman of the Bloggers Universe Malaysia forum, was all ears upon the offer being made.
RNC said he sees the value of getting bloggers from around the region, or even the world, to visit Malaysia and spread the word about the country's attractions, especially KL and Putrajaya and even the other FT, Labuan, via their blogs.

The other bloggers at the dinner were P. Kamalanathan of My (Malaysian) Views, A Voice, Eric Woon of I Am A Malaysian, De Minimis, Nuraina A. Samad, and Donplaypuks@.

It turned out that one of the bloggers at the table was a VI schoolmate. Let us now with thankfulness is Donplaypuks@' other blog, "about the halcyon days in victoria station in 1966-1972". Blogger and Minister spent some time catching up with the good old days.
Picture shows RNC with the 40-year old year book.

Thanks for the free publicity for my new blog 'let us now with thanfulness' which is the first line of the Victoria Institution school song.

The blog is at http://lunwt.blogspot.com/ and is about the halcyon days at Victoria Institution between 1966-1972, not 'victoria station'! Lol

And the 40 year old book he is holding is my copy of the 1969 VI School Magazine 'The Victorian' in which his PMR success of 1968 is recorded!

Thanks once again for the invite. The food was fabulous and the company scintillating!
http://donplaypuks.blogspot.com

WOW BESTNYA BRO! THAT IS GOOD!

Anonymous,
It is indeed noble of Raja Nong Chik vision of making KL a world class city. The bad part is there are no world class people in KL. All we see are touts and unscruplous taxi drivers. The city is still very dirty and the image of KL is ugly. Try taking a taxi anywhere, no taxi will use the meters and they always ask for set fare. On top of that these blood sucking taxi drivers pretend they do not know the place but when you agree to the asking fare, they suddenly know exactly where to go. KL has ways to go to even think of being close to a world class city.
Sweet dreams Raja!!!!
Disgusted

It was certainly refreshing to meet the Minister. The one thing that struck me was that both he and his charming Datin were such good listeners. That is very rare for people in power.

And, just on the basis of what Bro Syed said over dinner, the Minister and his team will have enough on the already full plate of matters to look into.

Many thanks to you for the invite.

I would suggest the FT minister buy a big stick and walk through DBKL offices everyday. Whack the buggers who are not doing their work.

Why is the minister in Putrajaya? He should be in KL. The problem is DBKL. Ask him to manage by walking about. If he does that, I guarantee you all problems will solved within a week.

Eh ... how come my good friend Parpu Kari and I were not invited ??

don't you (already) know that KL city Hall is full of corrupt parasites !! so, what are you going to do ?? Making reports with MACC ??

I think your stunt of meeting bloggers is more of publicity for yourself !

TAKE A PEEK DOWN SOUTH AT THAT RED DOT AND LEARN TO WORK LIKE THOSE KIASU FLERS.

DON'T EVEN BOTHER TO LOOK SO FAR LIKE... AT VANCOUVER OR AT MELBOURNE.

AND BTW, DON'T EVEN THINK OF WASTING TAXPAYERS MONEY ON ANY 'LAWATAN SAMBIL BELAJAR' CRAPS TO THESE FAR AWAY PLACES.

And who in DBKL approved the designs of STAR and PUTRA Lrt stations at Masjid Jamek? When it rains, you will get wet if you cross from one station to another, eventhough both are located back to back. Stupid architecture of the highest order! World class city konon.

Get the basic stuffs in order first la.

Dear Rocky, I wish you would use the term Sopo-bloggers instead of just bloggers. It's misleading as I think most bloggers are not political or social. Thank you.

I wanted to add this was the 1st
time I ran into RNC after 40 years.

But I liked his modest, sincere and down to earth approach, not to mention 'more the carrot than stick approach'.

Perhaps the Govt should recruit more from people with this background of secular education, tertiary and professional qualifications and private sector experience, having run and managed their own business as well.

There's nothing like experience and integrity for an outsider to manage DBKL.

I'm sure he will succeed in turning DBKL into a world class municipal authority!

Anonymous said...
This comment has been removed by a blog administrator.
3:05 pm

Sorry Mr Rock, for bringing this up here.

You mentioned before that you were called in to assist Bukit Aman because of the seditious comments hurled towards the Monarchy, specifically to the Sultan of Perak here on one of your previous posting.

I wonder if one of the "Six to be charged for insulting Perak Sultan via blogs, postings", as reported by The Star today is the commentator that goes by this “wandererAUS” nickname. I would certainly like to know how he/she looks like. About time this country uses the appropriate law to deal with such people. And they think they can hide behind anonymity?

Now that you have the Minister's attention, please inform him that to make KL a world class city, he only has to take a walk (no, not drive by in a limo) in Central KL, eg. Pasar Seni/Kota Raya area, where most tourists venture, to see the broken and uneven pavements, wires sticking out of traffic lights, litter and grafitti all over the walls, dust bins that are full to the brim, rats dancing in the sidewalks,(no kidding!), cockroaches in the drains and back alleys, rosak public telephones, escalators rosak, road fencing twisted and broken, FT logos on street furniture needs repainting, spit, (yes, you read correctly) on pavements, five foot ways blocked by motorbikes, filled with trash, I could go on...

Plant more trees to provide greenery, clean up all these mess, make sure public property is repaired and maintained,(yes, these things need maintenance too!), repair and replace broken paving stones, so much can be done to beautify the city. {Dare I say..look at Singapore}, create better traffic flow to lessen pollution, enforce an emission control to all vehicles, spot checks, esp. buses waiting behind Central Market on a weekend, and waiting to pull into Perhentian Pudu, the air is awful around there. Clean up taxis, and apply a minimum standard for cleanliless and courtesy to all taxis.

I am sure many do echo my thoughts above, no need for grand projects, just start at grassroot levels, and you will be surprise how effective this will be.

Don't even start comparing with Vancouver!

Agree with KL resident. I hope Raja Nong Chik will do something about the stinky longkangs of KL. His ministry should start spending on a mean project to cover all the open-drains in KL and also keep the pavements in order. I've witnessed many locals and tourists tripping and falling on these uneven pavements and sometimes its serious. Kalo aku tourist pun geli tengok, jalan sikit jer ada longkang tersumbat, penuh dgn tikus,bau busuk nak muntah. Believe me there's nothing quaint about it!

Maintenence culture is terribly lacking not only in KL but the whole country.

Another issue is hygiene. Just take a walk at the back lanes of any commercial area and you will be greeted with flies, filth and rats. The management of the buildings are also to be blamed for "it's not my responsibility" attitude.

why is rubbish strewn every where?
The answer is because there are hardly any dustbins within reachable distances. Just walk along Jln Burhanuddin Helmi, Taman TTDI and show me one public dustbin there. There is none.

These are the simple little things that make a difference.

Wipe off all toll plazas!

Anonymous said...
This comment has been removed by a blog administrator.
4:56 pm

Raja, stop being buddy-buddy with the bloggers. Get down to work. Being pally with govrnment sponsored bloggers wont help you. Understand?

the gr8 people in DBKL thinks the whole world owes them a living, despite collecting assessment rates from the city dwellers; something which they can't even do well.
Even organising the "bertemu pelanggan" is done pathetically on the last friday of the month at their grand premises when collecting assessment can be done reaching out to the city folks.

They do not know any SHAME n have no PRIDE!!!