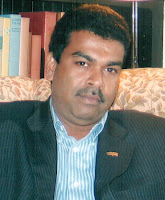 Ashraf Abdullah, who runs the blog Jejak Pujangga, has been appointed Group Editor of TV3. This is a new post created under new Media Prima news head honcho Ahmad Talib. MP's three other channels - 7, 8 and 9 - will share a GE in Manja Ismail, who is currently Berita Harian GE. A veteran is expected to come back to BH to take over from Manja. Ashraf, 42, left NST in 2004 soon after the group came under Kalimullah Masheerul Hassan. He was a News Editor of the paper, which was still a broadsheet then.

Another blogger may come back to NST as a senior editor, she was overheard telling Dr Mahahtir at a book launch this afternoon.

ah bro congrats to ashraf. he was my senior before and i know he can do the job

welcome back mior to berita harian. i do noy know much of u but i do know that you are a nice person, tak sombong

and the woman blogger, kak ena, welcome back to nst. nst needs you badly as you would surely be able to repair the damage done in nst under the ever powerful bp, lee ah chai and lionel

and to manja, off you go

itulah bro, the moral from the story is jangan berlagak or ego, that was the problem exactly with manja and hishammuddin aum, once dah pegang jawatan top terus tak sedar diri

This is Ahmad Talib's party. He is getting rid of the old faces in the NST and TV3. Let him have his fun. But I can bet my last dollar his fun will be over when ratings in TV3 drop drastically and circulation in NST goes down under. Already, morale in the NST is so bad that staff are thinking of ways to leave a sinking ship, or are waiting for a VSS. Ahmad, have fun while it lasts, because reality will sink in. In the meantime, I urge NST staff to stay calm in the face of uncertainty and adversity. This madness in NST must stop.

Media Prima has been turned into a giant propaganda machine with the ascension of Ahmad Talib. But the people are not blind. Now the people will be turning increasingly to the Internet for the truth. Barisan Nasional is digging its own grave. Rocky, come back to the people. Pse dont join miscreants who will eventually bite the dust in the next general election. Already, I heard there have been a few prominent resignations in the NST news desk. This will eventually open the floodgates.

Congratulations Azraf, Nurina and Mior.
What about Manan?

Ashraf was a good reporter, a well-liked editor and most of all, a good teacher.

As a cub reporter under him, I benefited greatly from his tutelage.

I wish him all the luck.

Good for you Ashraf! Ahmad must have trained you well. I heard people in NST like Lionel and Chandra are pissed off knowing all the Ahmad Talib's men are coming back! hehe! they shouldnt worry actualy. They can work for malaysia insider like joan lau. What about Ah Chye? Is he going to resign? If these people are really good, they should not worry. Ther is a malay saying - sekali air bah, sekali air berubah. Last time the air bah swept away Ahmad Talib. Now the air bah swept away others. Ashraf will do well in TV. Manja also. Because they are journalists.

My dear friend ashraf. Please take good care of the girls in tv3 like you did to nst and bh girls when you were here.

All the best. Hope you have fun there too.

Congratulations Ashraf @ka Sivakumar. You will do good.

Send my regards to brother Sharad and sister Saroja too.

Anonymous said...
This comment has been removed by a blog administrator.
8:23 pm

Go jump in a lake. That will be the honourable thing to do for a spineless men like you.

We, at the Newsdesk, HATE YOU!

"Another blogger may come back to NST as a senior editor, she was overheard telling Dr Mahahtir at a book launch this afternoon."

Ashraf is a good guy lah...

He was at NST when the circulation was the highest.

Kalimullah, Brendan, Ah Chai and Chandra brought circulation down to the current 90,000 (minus the discounted sales to schools).

Ashraf, are you still a Muslim?

rehman rashid how lah.. that day say want to resign. when are you resigning rehman. don't tell me you want to jilat mat talib now.

sorry bro.. must have principle man..

btw if you need the salary, stay lah.. lick and lick

can tell all of you one thing. ahmad a talib and his gang will take the media companies to the bottom of the ocean.

Same circus different clowns, Malaysian politics at it's best this.

watch out the pro-reformasi elements in TV3 bro, they are sitting in impt positions. that includes senior managers under YOU.
You, Me, WE,YOUR?

NST's resistance has finally broken down. Our struggle against fascism, lies, treachery, deceit is over. Our plea to the powers=that-be to save the paper has been given a wide berth. We surrender.

It is no secret that Ashraf memang orang kesayangan PM, from his Kuantan days.

Ashraf will do anything for Najib. I know so.

What's wrong with you? Use you head-lah.
Cakap sikit pada Tun Dr Mahathir means you need his blessing...apa daaa?

Judging from the comments that're being posted by NST/ex-NST guys here, OMG! Now I know, Kalimullah wasn't the only problem! Patut la.

nstman says ' prominent resignations in the NST newsdesk'.
this moron nstman is nothing but a disgruntled arsehole. it is not prominent if pigs like ahcai run with the tail between their legs bcoz bloody dirty swines are like that.
i think media prima is doing the right thing by roping in experienced journalist like Noraina and Asraff.
These two are not half-past-six copy n paste kindda journalist that achai is all about.
achai is a bloody cheap scoundrel and he knows what he did in china.
lu tak malu ka woi...

WHOEVER TAKES CONTROL OF NST OPERATIONS MUST REIN IN ANOTHER 'GROUP EDITOR' WHO HAS BEEN CONVENIENTLY AVOIDING THE WAVE OF CHANGE.
MANY EVEN IN NST HAVE FAILED TO REALIZE THAT 'GROUP FOTO EDITOR YANG MULIA KAMARUDDIN - A THIRD ROW PHOTOGRAPER WHO TURNED HIMSELF INTO ANOTHER GROUP EDITOR UNDER HISHAMUDDIN AUN - HAS GONE UNDERGROUND.
PLEASE KEEP THIS DANGEROUS CHARACTER AT BAY AND PUT HIM WHERE HE RIGHTFULLY BELONGS.
AND PLEASE CHECK WHAT HE HAS BEEN DOING FOR THE LAST COUPLE OF YEARS, AND YES ... A BIG MAJORITY OF NST/BH PHOTOGRAPHERS WILL TESTIFY.
SOME SAY HE IS ALSO AH-CHAI'S BUSINESS PARTNER.

So all the Mahathir's man got back their job after Paklah has been kicked out...

But watchout what if Najib been kicked out later?

i would like to refer to this line that you wrote:

achai is a bloody cheap scoundrel and he knows what he did in china.
lu tak malu ka woi...

how can u write such a thing. i am very very sad uwah. how dare you. ah chai is the best guy in nst and he is an example for others to follow. he is a idola. let me tell you why. someone who was areporter for a short while and went on to become a sub editor. he was better known as the bookie. was so lazy. never want to work extra. if he is asked to work would run to the dr and claim mc. and yet he was promoted as ee. is that not an example to others that you can be lazy and bodoh but u will be promoted if u are a bookie

what big offence did he do in china. dont make a big issue lah. all he did was went out jalan jalan cari makan ambil udara segar while the other reporters were busy on assignment. what is wrong in that. after all, he is the ee and can cetak rompak the story from bh or bernama. itu pun mau kecoh kah.

whatever it is ah chai you are agift to journalism

Media Prima has been turned into a giant propaganda machine with the ascension of Ahmad Talib. But the people are not blind. Now the people will be turning increasingly to the Internet for the truth. Barisan Nasional is digging its own grave. Rocky, come back to the people. Pse dont join miscreants who will eventually bite the dust in the next general election. Already, I heard there have been a few prominent resignations in the NST news desk. This will eventually open the floodgates.

We need quality in news and not quatity.

Dear Ashraf...good to hear youre back bro. Having worked with both Nuraina and Ashraf in the past, I must say I still remember the both of you as very nice people who were down to earth and cared for the reporters. This is something the dumb Ah Chai & Lionel never were and never will be. Anyway, my sincere hope is that you will both continue with your kind and humble ways and never let the power given to you get the better of you. What goes around always comes around and being humble and good to your fellow mankind never hurt anyone. So, to the both of you, I wish you the best. To Nuraina, I hope you are the saviour we have long been waiting for to save the NST. It was great working under you in the past and so hope it will be the same again. Cheers!

hullo Bro, your blog has been hijacked by anons the cowards!

Brother Pasquale ... I'm sure he still is ...As Your Are ... should we wager a Mystic River Pinot Blanc on that ?

All the best Ashraf...