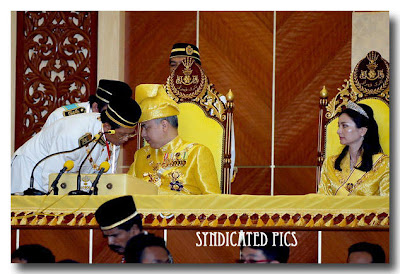 "Beta tak mahu masuk campur. [I don't want to get involved in this]. I just want to give my speech, so respect my speech, when I am giving it. You understand that? If you want tto work with me in future, you have to respect my speech. Understand? "So go and tell that (to the Pakatan Rakyat assemblymen who had stood together in front of the royal dais) to take their seats." - Raja Dr Nazrin Shah

You have to give it to the Perak Regent. He knows how to give a good one.

And good thing, too, that Nizar understood.

This should have been Page 1 of the papers but it was buried deep inside the pages of NST [Perak Regent admonishes Nizar to respect Royal address] and The Star [Five-hour wait for Nazrin].