There are enough hints in the article to suggest that someone, or a group of someones, is making tonnes where they shouldn't, at the expense of Mother Nature and all of us in general. 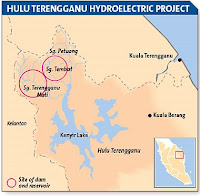 "As if it is not bad enough that over 6,130ha of wilderness will have to make way for the two reservoirs, the Terengganu state government intends to log another 12,620ha around the inundated area.

Much is at stake: forests and riverine habitats, together with the flora and fauna within. What worries conservationists is that the forest here is among the last few refuges of the highly endangered Sumatran rhinoceros, Malayan tiger and Malayan gaur (seladang). It also harbours the Asian elephant, tapir, primates, wild cats and plants, of which 94 species are Red Listed as threatened by extinction by the International Union for Conservation of Nature.

Last November, Mentri Besar Datuk Ahmad Said told The Star that the logging was to prevent loss of timber revenue when the area is submerged – but he failed to explain why the state is allowing logging of an extra 12,620ha outside of the 6,130ha that would be flooded."

I'm very interested on who these logging companies belong to. I hope The Star follows this up with the MB. Surely, he knows who the loggers are and, more importantly, who the people behind these loggers are.

people behind the logging? His Highness' family lah! Why did u think he wanted Mat Said to be MB so much? Bcoz Hj Idris wouldn't let them get logging concessions....

In Malaysia, politics reign supreme. The Monarchy is subservient. The Malaysian rakyat are but slaves to the regime whoever sits in Putrajaya. Accountabibity and Transparencies are not in the politicians' dictionary. The big guys call the shot. Ant the stupid voters put them there and gave them the mandate. Blame who? Blame ourselves.
malsia1206

Saw you in Bangsat Telawi 3 area last night talking to a friend...boy..you don't look too good..has this got to do with the missed CEO job at Malay Mail??

Been there during CNY holidays. One of the nations richest river resources in now a pasar malam, a far cry from before logging tracks were opened. More anglers and drift nets than fishes. Gone are the kelahs, tengas, kejols, sebaraus and other river fighters. SAD, REAL SAD.

Already 50 years go raped by BN, what more with this small mosquito bite on the arm.

It is YOU the voter that voted them in !

"I'm very interested on who these logging companies belong to. I hope The Star follows this up with the MB. Surely, he knows who the loggers are and, more importantly, who the people behind these loggers are."

No need to guess la! Just follow the trail & it will lead to... Najis Tong Rosak Ltd.

Idris Jusoh had halted logging in Terengganu. The beneficiary of this new logging phase may well be the Terengganu royals - this is certainly the opinion of the logging fraternity here in Terengganu. The 13,000 hectres of forest now to be clear felled (100% DESTRUCTION)is done for no good reason, in fact it will impede the new hydro electric project now underway - the lake for this project has already been felled (the 6,000 hectres), so the MB lied when he talked about getting back revenues. The 13,000 hectres now to be logged is above the new dam - its pure greed and stupidity.

The area needed as habitat for the tiger, rhino, tapir et al is very large - this logging will destroy them, fact. There is nothing left, especially as the hydro electric dam also must have a space cleared for power lines.

I had suspected that the Sultans decision to kick out Idris was suspicious - the logging was announced in Mat Saids time.

The royals in Malaysia are greedy for money, and now they have the power. Their main incomes have always been from logging (they have concessions ala super-rich logging Pahang), its just that now it has become dangerous. Does the Sultan of Terengganu, for instance, get a royalty from oil and gas....no.

Thankyou Rocky for taking this on - I hope others will add in.
Rahim

the reason being machai said if he was transferred or removed, his budak budak would create problems and this would cause aheadache for teh enw regime

let us see how successful machai would be

Roc, thanks for the note on this impending destruction of our forests near Kenyir. Same thing's been going on in every state. Lets see who's behind this... from the state admins down to the companies.

not all these people are pure malays like kamarulzaman and sajahan are full mamak who behave as if they are more than malays. firdaus is another case of an indian convert who thinks he was born malay. suat ling is a chinese mmarried to a malay and takes advantage of that

Why talk about Nelson. They are Kalimullah's blue eyed boy. They were groomed to receive suap.

Nelson is an ikan bilis in NST like any other ikan bilis nabbed by MACC.

The jaws are left to roam around. Most of NST editors are worse than Nelson.

Ex editors like Mr DA & Mr KH scooped tonnes of money through reports published in NST. Where are they now? Flaunting their wealth and those ill gotten wealth were either made through arm twisting or loot sharing.

It would be interesting if the Star does a follow-up as those who rape our environement for their selfish interests should face the rap irrespective as to their political affiliation. I am all for this expose as we,humans, have long lost the moral right to exploit nature for our progress since we have hard wired ourselves to the assumption that the environment is ours there for the taking.

Moreover, ecological disasters and impending catastrophes should alert us to the fact that the developmental model we have hitherto pursued with reckless abandon demands reconfiguration, a pardigm shift that is well overdue.personally, i am an advocate of a humane, sustainable growth paradigm where the quality of life takes centrality and precedence over crass GDP growth figures,per capita incomes etc. For life is more than mere material progress (though i do not deny it is an important subset of a new holistic socio-economic paradigm).

It is also interesting whether the Star is fair enough to look into the neighbouring Stong issue, given that the approval to rape that entity was given by no other than the latest proponent of change to hit our local political catwalk, a guy by the name of Husam bin Musa...rings them alarm bells doesnt it:

Why not an expose about the faces behind Maxson by a rag that has been the main apologist of the opposition (Perak and all) lately.Moreover, I am sure malaysians would love to know more about the credentials of Husam bin Musa, the new corporate swinger on the block who served his corporate tutelage undder one well known corporate lebai, Nikki Lee Aziz.

Let's face facts. Malaysians just care two hoots about conservation and this is a proven fact.

Look at the state of our rivers, coastal towns, islands and water impoundments.

They are filthy and has been filthy since Merdeka, and getting even worse by the day.

Conservation plans have never been serious business but environmental degradation is an everyday affair.

So do not waste time highlighting problems that will never be addressed by the Government. If at all, it will only be lip service. A Minister will visit the affected site, the press will blow up the visit, and in two weeks, it is all forgotten.

so, Rocky..
can we comments the story of PKFZ now?
or maybe no need..
because this case can be like Eric Chia...
nothing at all at the end..
masuk peti sejuk.....

IF THE RESERVE MARGIN IS ALREADY HIGH, IF TNB IS SUFFERING HIGH PAYMENTS TO THE IPPs WHY IS TNB BUILDING MORE CAPACITY?

I say Bro, Che Khalib is crying that he has to pay capacity charges to the IPPs, he has to suffer high reserve margins and so on. If so then why does TNB want to generate even more electricity? Why are they building another 212 MW of capacity?

Logging is a well planned stunt - legal or illegal.

Everyone has a hand in the cookie jar. JKKK, Ketua kampung must close eyes, District Officer must close eyes, Jabatan Hutan, Perhilitan, Land Office ... all the way to the top. It also needs hefty fundings, heavy machinery and good logistics. So, people involved are powerful, with good network and in cahoots with authorities, politicians etc.

I work in the countryside I know.

If the government is really keen to stop illegal logging, analyze daily satellite images will do.

Logging in Trengganu, Port Kelang cover up and please check also the takeover of KL Monorail.
The people in MOF especially in the MOF Advisor office is doing things as though the own the country.
KL Monorail will soon be the next big issue in the country bro.

You need Citizen Nades from the Sun to do a thorough investigative report to see who has been raping the State.

Many of the big operators hide behind the veil of limited companies and nominee shareholders and directors.

Follow the money and you will find that this business is controlled by 1 or 2 timber tycoons with close links with the powers that be.

Oh! utusan rocky is also blacking out the report on the newly released PKFZ financial report!

What lah you Rocky, you don't know the very establishment that you support, that you work for, that you help them to spin stories are robbing us the Rakyat dry since 1957? Just like the Perwaja, the MBF, PKFZ etc etc.,...

Don't be a hepocrate lah Rockey!

Anon 2.13pm sounds like a desperate human being.
The issue is illegal logging or more specifically 'legalised' illegal logging.
You could be Anon 6.30 (half past six)la Anon 2.15.

p/s go get a name

I aint malay..but the ppl listed for promotion deserved it..i know them..they are hard working journos..i'll vouched for them...the fucking coward who tried to make it seem its like a race thing should be hung..revive then stabbed again..asshole...probably frust coz the jackoff can't get noticed ..what a dick!

Why even bother reporting this? Nothing is going to be done anyway..who are we kidding?