Iain Buchanan ... "has crafted one of the most stunning local publications you will ever come across". - Amir Muhammad

I am in Penang to attend a soft launch of the book Fatimah's Kampung [When: Tuesday March 3 at 9am; Where: Balai Persiban Agung, Universiti Sains Malaysia, Penang].
The author Mr Iain Buchanan and I first met nearly 30 years ago in Singapore (he later married my Sec 3/4 teacher, Anak Si Hamid). There were still a few kampungs in Singapore back then, perhaps as few as there are kampungs in KL and Penang today.

by Amir Muhammad
Remembrance of Things Past, 4 Feb 2009

"Although this is a work of fiction, it’s very much an act of remembrance. Kampung Hidayah represents all that we have forgotten about old villages, including the respect for nature implicit in their structures and rituals.

"Iain Buchanan did not grow up in such a place, and you might say he’s a romantic. But romantics are better than cynics, and in reconstructing the collective memories of his wife and her extended family, he has crafted one of the most stunning local publications you will ever come across. The colour illustrations, many of them spanning across two pages, are full of wonders. You can see every leaf, hear every cicada, and even smell the “pleasingly mysterious” bunga tahi ayam: “not sweet, not fragrant, but musty, spicy, with a little bit of pepper, earth and smoke.” 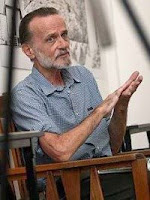 "Labelling books can sometimes do them a disservice, and whilst the book will undoubtedly appeal to older children (many of whom may have lived the story!), it will strike a chord with every Malaysian who cares about the environment and heritage, regardless of age, and will probably travel very well beyond these shores as the issues it raises are universal ones.

"I'm not ashamed to say that the story moved me to tears - especially the part where Fatimah finally does come face to face with her tiger."

Rocky, I have seen the book, a good book.a type of book or and illustrated book that makes me angry for what?! One hundred Iain Buchanans can and will never teach moronic Malaysians anything least of all about their precious environment. When I was a reporter my passionate beat was actually on the environment, Malaysian environment, that was way back in 1982, guess what no one cares, we are still doing it!
As we speak the Kelantan state government is still shaving a big tract of rain forest in that state, I guess Nik Aziz will have his Islamic reasoning for it!
Let's go to Menado guys, life is short!

Kelantan? What about Selangor .. no more hills and no more jungles. The BN government under Toyo really cut hills and trees and the present PR government is not really doing that much.
Look at Bukit Antarabangsa.

"it will strike a chord with every Malaysian who cares about the environment..." - What, all 4 of them?