update, abt 5pm:
Lim Kit Siang was shocked and hurt by Karpal's statement the other day, but he hasn't expressed his feelings yet about RPK's outburst in The Star. Click here to know what Kit's commenters are saying.

original posting:
RPK wants Anwar Ibrahim to quit? I say, I think The Star might have misquoted him or taken what he said out of context. RPK has dedicated many years of his life trying to put Anwar Ibrahim up there. RPK is the man who led the Free Anwar Campaign. He's been with Anwar Ibrahim through thick and thin.

Heck, he even went to jail for Anwar Ibrahim! 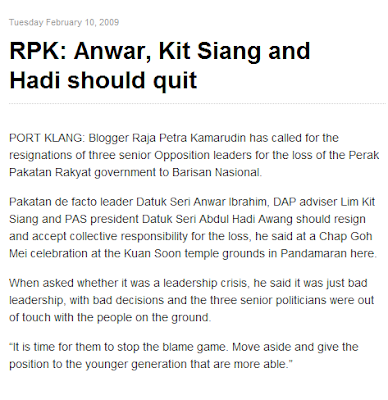