Why Ahmad Ismail will be sacrificed ...

Update: Who does Ahmad Ismail of Bukit Bendera act for? Who gains from his acts?- an analysis from a blogger from Down Under. 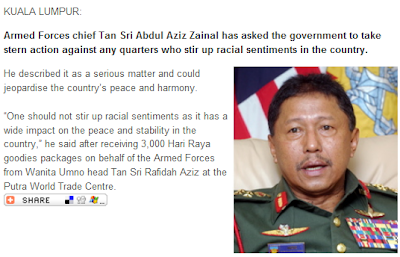 Original Posting: An Editor of a Chinese daily called me up yesterday afternoon to ask me about "the latest on the ground". He sounded anxious. "The Army chief has just called on the Government to take action against those behind racial tension. When was the last time an Army chief interferes? What do you think?" [Read here]
I think the Government should be firm in handling racially-sensitive issues without having to resort to regressive measures [read the All-Blogs' joint press statement with Centre of Policy Initiatives here]. Using the ISA on the so-called racist extremists (as in the case of the Hindraf 5, for example) has proved futile. On the contrary, political parties and civil society movement have hailed Hindraf as heroes and saviors, and hardly penalize them for their extreme views about the Malays.
Ahmad Ismail, who'll know his fate today [read here] is not the first Malay politician to play with this racial fire. Two years ago, Khairy Jamaluddin was dancing in the same fire when he said that BN component parties (read the Chinese-based component parties) would take advantage of a weak Umno.
Remember how incensed the MCA and Gerakan leaders were? Didn't they call KJ a racist? Didn't the son-in-law refuse to apologize?
And remember how the Prime Minister responded then?

That was pre-March 8, of course. Like NST group editor Syed Nadzri says, we live in a brave new world now. And Ahmad Ismail is not the PM's son-in-law. And ironically, with a weaker Umno, the BN component parties have been behaving just as KJ had predicted.