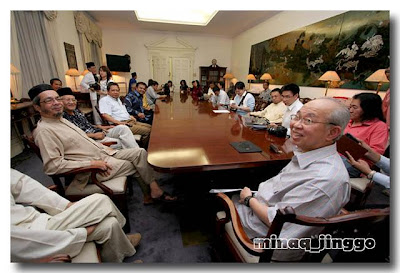 Breaking fast with a genuine contender. Will Tengku Razaleigh have a clear shot at the Umno presidency this December? After last Thursday's stormy supreme council meeting, Najib is perceived to be firmly in the driver's seat of the country's most powerful party. But Ku Li remains a picture of confidence and is not turning back.

Read his thoughts on the Big C (corruption), the ISA and what he would do if he bcomes the PM, here, during a dialogue with bloggers that was gatecrashed by journalists yesterday.

Frankly, I can't see the difference between Ku Li and the other contenders. Worse still, he looks to me more of one who reacts to events, rather than pro-active. I recall a July Off The Edge interview whereby he gave quite a flip-flop anwer on rising fuel prices. It was only after the Shabery Cheek/DSAI debate then he came out loud crying he also has a'formula' for reducing fuel prices.

Honestly, I like KuLi but I am not really sure if the warlords in UMNO will allow him to have it his way.
Had he won the UMNO presidency from Mahathir, the country wouldn't be in this state today.
Abdullah too had good intentions but he couldn't move "an inch".
We should thank you for asking the ISA questions. Well done, rocky.

2) His concern on healthcare is refreshing. Its a ticking time-bomb nobody want to talk about because there is a default plan of letting people be sick and just die.

Ku Li can win!!! He He HE, sorry ku li, if kelantanse for kelantan, then you will never be win this election because he will forget about 13 states

Re: "dialogue with bloggers that was gatecrashed by journalists"

Could you do some corrections, please?

I strongly believe they did not gatecrash, they were invited for the buka puasa.

I have the invitation and there's no mention about dialogue with bloggers, or "bloggers-only dialogue session with PM-hopeful Tengku Razaleigh" as put by TV Smith.

A good thoughts from YBM Ku Li on the corruption issue especially he said about model which is used in Hong Kong which is very effective if will be practice in Malaysia scenario too and about preparation for the next 25, 50 years between Penisular, Sabah and Sarawak.

Strange ain't it when one deemed fit as Finance Minister and responsible for hundreds of billions is not trusted to chair Khazanah which manage a "meagre" RM20 bil? Hermm...

Ku Li wants Badawi to stay on till Dec. cos then he will still be able to contest. If Badawi steps down by Oct. 9 or earlier (as demanded by the MT UMNO), then Najib will become acting Party president. In such event the YDP Agong will also most likely appoint Najib as PM. If that happens the consolidaion around Najib will be very fast.

Ku Li then will face an even more uphill task for the party presidency slot in December. It will be another case of another challenge that did not go anywhere for Ku Li.

Ku LI has so far challenged the presidency two times - 1st time in 1987 and 2nd time against Pak Lah, 3 years ago where he got only one nomination.

Ku Li is not interested in seeing Badawi step down before Dec 08.

Ku Li shud not worry when Badawi steps down, but Badawi must step down now. Ku LI can still make a strong platform for the party presidency. The Party may not be 100% behind Najib either.

But just like Najib, Ku Li does not have any program for the future of the country. In this case it is ok because no one has a road map for the country anyway.

You should go and bukak puasa at Najib's house on friday.

Then you'll get the latest confirmed news. Just wait after hari raya.

They say they can give dolah until 2010 but it's not the year actually, but 20th Oct.He he

Tengku Razaleigh is still, to me, one of those upper class twit who flaunt his blue blood and he never never looks at your eyes when you have a conversation. If they do not look at your eyes, said my late father these people cannot be trusted.
Frankly speaking, what has he done lately?1 Seriously!

KJ was so busy to defend his FIL post that he has no time at all to update his Rembau.net.

It's the final countdown for him as well?

It will be good if the Najib Mahyidin combination can talk to Ku Li. They can join effort and Ku Li can be a very senior Cabinet Member. Ku Li will definitely have a role to play in uniting Malaysia in these coming months. Together as a force to be reckon with, Malaysia will be a better place.

There was an agreement by Kuli to meet only bloggers two hours PRIOR to the PC with the MSM.

Plans were made about two weeks ago and I believe about 20 bloggers signed up. Then, RPK got ISA-ed and the idea went astray.

Anywayz, even one week is a long time in politics.

Today is Sept 23, the day of reckoning. Or the day that will pass by and nothing happens. As I write this, we see West Malaysia is in a state of haywire and amazingly all eyes are suddenly on us in the East now. The politicians here are now being looked upon as the KingMakers to decide the fate of the nation. As we muddled through 2008, the state of chaos has resulted a deeper economic hardship to us. While you politicians are fighting each other for political dominance, we the rakyat, are suffering. And yet, you guys still doesn’t sit down and asked of what we really want. Instead, you continue to create issues that are degenerating our nation into mayhem.

Let us tell you that we, the People of the East want this chaotic situation to end. When we became part of Malaysia in 1963, there was a consensus under the Cobbold Commission. It gave each and every one of us the opportunity to show our preference. Now, what we want is a consensus again to determine to whom our allegiance are. Politicians may said they have the support from the people, but do they? All, in all we are the ones suffering from this debacle.