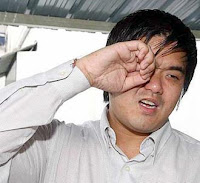 Ouch! First it was Anwar Ibrahim's aide, that Saiful guy who claimed to having been buggered by the PKR advisor.

Choosing the right aide has never been more crucial to a politician's well-being.

Bro Rocky. PKR is in an urgent need of a sweeping internal party restructuring. Mohd Ezam may have been many things to PKR, most of it negative, but he was right-on when he said PKR would be better off if it focused on strengthening its internal party machinery first. But I think the hangover from March 8 has yet to wear off...

PKR is fast becoming a cult.

What to do, leadership by example:)

Another spy planted by UMNO to bring down PKR? Or PKR is Just-Another-UMNO? There had been so much hope for Pakatan Rakyat to bring government back to people. Show the people how PKR handle the situation!

P.S. I received a SMS which says, already there is an incident where a peaceful ground breaking ceremony for a surau was marred ugly by protest from a Hindu group, where a politician was slapped when he intervened. All I can see is a Hindu group is now too bold enough to challenge a Muslim community, so where do you think this might lead us to, well I am not going to say it for you but you use you grey matter to figure this one out. A very dangerous time indeed for all of us.

If you're a clown and being so insensitive, that's what you get. If I was there, he'll get a kick instead.

So, even Chedet has said Anwar did a better job than Shabery, quoting the latter less experienced than Anwar.

So, are you going to retract your neutral ground on this topic? Or do you still believe there wasnt a winner between Anwar and Shabery in that debate?

Loh have forgiven him.
Both are wrong.
This young man needs to be more patient...asking questions.
He should not think..he is so powerful as a parliamentarian.
He maybe desperately trying to prove himself....worthy to be elected...but he needs coaching...how to handle people.
That punch may teach him something...already.
Good for him.

Never in Malaysia history a Member of Parliment was treated that way. If a police report is made then let the course of laws take place. Sad day for Malaysians lawmaker integrities. Never before in our history a MP was assaulted in public.
Charged that fellow. PKR - what a party when your Selangor MB political secretary aide assaulted your own MP. Shame on you and shame on me for voting opposition during PRU12.
Go to hell all of you. To YB Loh Gwo Burne this is what we call Karma

YB Loh Gwo Burne this is your Karma. Shame to the person who assaulted him (an aide to Selangor MB political secretary) what a shame and shame on me for voting the opposition during PRU12.
MP what Mp. An MP assaulted and punch in public by his own party aide to top leaders.
if YB Loh said, that he accept their apology then he better step down as an MP. Unless he is really good for nothing.

your The Star link is broken..better check it out

Was Gwo a proxy for Anwar, you know, the "black eye" thing?

Regardless of which party you belong to, there will be hooligans who don't know how to behave. It's up to the party leaderships to be more selective in their choice of aides or party leaders, or else the same incident will recur.

Caption for the photo

OMG I wanna be like Anwar. Can someone please give me a black eye?

first .. i don't know why this chap was selected as PKR's candidate. Lingamgate of course is his credential but can he lead!

when we have under-age sex, sodo mee, adultery, child rape, incest so common in our country, this is a non-event of miniscule importance.

this'quite interesting...an aideof YB punched another YB..who happens to be in the same ship. So i'd say this YB being punched because either he does not speak fluent bahasa or he's "tak reti bahasa". Dont ever jumps in the middle of other people's occasion..don't ever assume that you YB knows everything..whether the project being approved or not..leave it to the PBT..after all it's only ground breaking ceremony..

In response to this incident, the Senator Muhammad (Back Door Entry Minister) think that BN can control the people better! Huh? Hello!

We are sick of you control...

My feelings are stronger than this. DSAI needs a Chief Operating Officer or a Whip for the party. PKR is getting bigger on the outside but may be rotting inside.

Sorry mates, the PR is not going to last very long, they haven't learned the art of governing yet.Look at Selangor under PKR's Khalid, it's still crawling on fours.

The best of the five would be Penang and Kelantan, where DAP and PAS were in the majority.

PKR, though have more MP seats is in danger of falling apart because of greed and infighting.Anwar is a leader for himself, just like many of those in UMNO, but at least in UMNO the Malays don't beat up their non-Malay MP in the coalition.

The 3 strange bedfellows are still on a honeymoon, there is nothing common in their marriages, it will fall apart as soon as the honeymoon is over.

Believe me.Jot it down in your diary.

THis is the manifestation of the anger of the young Malays with insensitivity of the non Malays in PKR and DAP towards the Malay.

Khalid Ibrahim as per his attitude in Guthrie wo has no care for the lower people has taken a indifferent attitude towards teh Malays.

Yahsya Saari removal begin to show disagreement with pro-Indian policies to appease them at the extent of Malays.

The babi isu is insensitive towards the Sepang Malays and the general mulsim population.

Then Ronnie Liew flexing his chinese agenda in teh councillors appointment to flex Chinese interest into rural Malay area.

I believe a racial clash is brewing in PKR.

You can hate me for claiming this. Things like this never happen when UMNO lead.

As long as non Malays are living in the fantasyland to not acknowledge Malay as teh definitive race of this contry, there will be no peace and staibility.

Better UMNO than anything else. They can adapt and change with the time and situation. I believe they can improve. Get read of their bloody feudel thinking.

They will prove they can change if they rid of dolah bodoh early!!!!!!

Lets not be denial that we are still mentally, economically, psychologically, socially, politically, educationally divided by race.

BN acknowledge this and attempt to a balance to this to achieve a truly equitable and far distribution.

How can the race that dominate the economy yet seek equality with from the economically impoverish Bumiputera!?

... street demonstration
... non cooperation
... refuse mubahalah, dna,
... distracting issue with conspiracy theory, police report, lawsuits, statutory declaration, etc
... accuse the past
... making police report on each other
... punching each other
... sodomising aides
... suing victims of sodomy
... running to foreign embassy and embarass teh country, bring national rating down,
... claim racial integration but disregard for racial sensitivity
... making undeliverable promises
... making promises that is good to hear but not practicle
... others only known
....and many many more to come

... BUT ACTUALLY GOVERNING THE COUNTRY AND SOLVING ITS PROBLEM

Add to the number of civil suits or criminal cases in courts, and put all the blame to the Judiciary for backlogs!!! That's truly not fair.

Politicians by their rules... watch parliament in session...

And all other PKR sandiwara nonsense.

YB Loh U Shit Ass.. Coming from no where suddenly became a YB coz u r the video recorder of infamous LingamGate.

What on earth, PKR has no suitable candidates to lead. Tangkap Borong...

So, for the Surau case at Kelana Jaya, Yang Bodoh Loh, u better study further on the consequences.

And for the HINDRAF ass****. Kick your ass.. Behave yourself before your temple get doomed.

I think this aide must have been planted by UMNO. I think all the PKR man should agree to this statement, and not forgeting, the Selangor MB aide (BPR case) was also planted by UMNO! Blame everything on UMNO ! Ha ha circus politic....

Small matters lah. Compare to those OHNO, it is a dog eat dog world. They stab each other back quitely.

Keep up the good job Keadilan, the Rakyat support you.

What would happen if MP Burn did not turn up for the demostrating indians?
A conspiracy, the Indians were MIC supporters sent by UMNO.
But Al-Mighty revealed the true nature of PKR with a most deserved punch in the eye. Does it sound familiar.

he's now saying he's not angry though. yup sure, if someone punch me and then apologize saying it was a mistake yet never explains why he did it..i'd forgive him. nice show of unity from the PR.

as a resident of desa mentari i was very upset with thiz Mp Yang Bodoh Loh.. during da last pru 12...we give him a full supported..

but now we r very frustrated ..

he dont know everything but suddenly come to be a hero..

as a Mp he sholud be a healer not a poisoner..

Ha! Another day in paradise. Just send in the clowns.

Hey if you think Gwo burne deserve a punch. Why not I burn your house, and then punch you in the face for asking why? The people in the area is not happy in all races. They were angry why they were never consulted. As an elected MP he represents the people, if the people demands it the MP had to voice up for the people. YB loh simply wanted to know the situation by knowing who is responsible in the case. There is nothing wrong what our YB Loh did. If our MP cant demand for the answer hohoho they u guys with the bias comment deserve to be punched, if that is your resoning? beside who ask him to punch YB Loh infront of the hundreds of the public together with police and press? Did our YB poison the situation? Is he not the guy trying to protect Azam from beating by the public. I can see we have a very civilize MP. Unlike others who solve their way by fighting. Azam clearly reflects the people he is working with. Yes PKR need to do some cleaning, who knows how many saiful or other problems in the mist. Clearly YB Loh has proves to me that is a true working MP who will do the right thing. Hey guys stop your bias statement when it clearly shows who is in the wrong. Stop using racist excuses! stop saying melayu this melayu that, that is racist which i hate people seeing us like that. IT is shameful just like what Raja Retra said...

Be a little grateful!