Nuraina A. Samad on TV1's BLOG 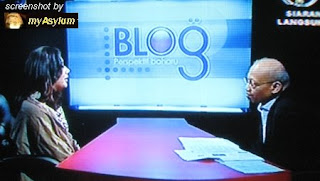 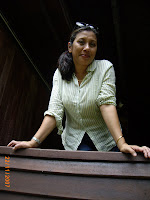 original posting
Tonight, 8.30pm. Netizens would know Nuraina for her blog 3540 Jalan Sudin, which she created in Jan 2007. Since leaving NST (after 27 years) in March 2006, she has taken up the post of Hon Secretary for the protem National Alliance of Bloggers, is a trustee for the National Press Club, and co-founder of N.U.R.I.N Alert.

She is Group Editor of Tell magazine and is currently co-writing Tun Saleh Abas' autobiography.

The daughter of ISA detainee A. Samad Ismail will be the first female blogger to appear in Blog with host Chamil Wariya, the CEO of Malaysian Press Institute. The weekly programme was started by Information Minister Shabery Cheek to prove that the Government is now blogger-friendly. So far, it has featured A. Kadir Jasin, Raja Petra Kamarudin and Zaharin Yasin.

Is Chamil Wariya nearly as good as Jeremy Paxman? Actually I was kinda expecting the clean shaven JJ or the magnetic Rahim Razali to pick Nuraina's brain. What a treat for all mothers, young and young-at-heart tonite.
aMiR

Gud of RTM to get a woman for tonight's Blog as today is Mother's Day.

And go Nuraina go! Jus be careful u don't utter anything sedeeeetious!

All the best, Nuraina!

Please ask why our police are so quiet about Sharlinie. And where is Shahrizat? Is she still helping with NURIN Alert?

1. Brader, are u sure this is Nuraina? Why she looks so beutifull?

2. My next question. How many childrens she have?

Happy Mother's day Kak Ena! Chamil Wariya will have his trademark "kan! kan! kan" on da show - watch out for it.

WOW, the next thing she should do is acting - perempuan melayu terakhir. good looking and charming!

yes, is sharlini dead and buried? why so quiet? tell the police we wont forget about this, their efficiency. they should at least provide an answer.

Rocky!
I will be watching 2 nite & so will wife{ also veteran journalist!}
Can u do me a favour{without being sued after} give NAS a kick in the rear end! I have been since BUM hunting for an autographed copy of her dad's book - I cannot seem to find it which the ol'man signed & gave my ol'man sometime in the seventies!!!
Deja Vu! Rocky! We are all part of the ancien heritage!
Chiao!
Mr.M

All the best to Ena and Happy Mother's Day.

Load them with all your charm darling, show them all ideas for fairness...

I wish to catch u on RTM, but other thisngs have to wait for the Man U game.

Good wishes for u & have a good show.

I wish to catch u on RTM, but other thisngs have to wait for the Man U game.

Good wishes for u & have a good show.

hmm I am lost for words, the old tactic used by the enemies is to penetrate the ego! Its working!

Well done, Kak Ena. Kak Ena is a nice person, and probably the most prominent lady blogger in Malaysia, but is nonetheless a lightweight blogger in terms of analysis, ideas or vision. Her style does extend far beyond that of regular journalistic reporting, but she has used her blog like many others to good effect to campaign for some social causes such those involving missing children.

The heavyweights amongst socio-political bloggers, in terms of impact, ideas and vision are still, variously, Haris Ibrahim, Raja Petra Kamaruddin, Malik Imtiaz Sarwar, Rocky's Bru, and Jeff Ooi, though Jeff is nowadays focusing on a political career. Kadir A. Jasin also draws substantial following thanks to his analytic approach to discussing issues.

The pose is seductive.

watch the show ! very dissapointed with Nuraina - she really cant talk and expressed herself.

Which Shaberry or Sha-Berry? Oh, maybe that Shaberry who participated in the Visitors International programme in 90 something and condemning the BN government during his talks there?

But he is taking a 360-degree turn in his views. Of course, like all politicians, Sha-berry changed from Semangat 46, lieutenant to Kuli but now UMNO big-timer. I wonder he still supports ISA and and all the things he condemned in front of the American audience?

Actually managed to catch the program (first time watching it live), and reviewed it, too.

It was disappointing, to put it mildly, but no fault of Ena's. RTM must have the absolute worst caliber of producers, with the kind of questions that they come up with.

And Chamil Wariya... good grief... not exactly impressive (and that's being kind).

Looking that you can't even string a proper short sentence ("Watch" should be "watched", my dear, and it's "express" NOT "expressed!), nobody would be surprised that you didn't quite enjoy the show.

Well done, Nuraina. I felt you were holding back some punches there, but you did well, nonetheless. Most of us would die before the host could ask the first question!!!

I must say that I had my reservation about the programme weeks ago, but it does look like it's getting better all the time. The new host is ok.

Who's on for next week's blog, and when will they put you on, Bru?

And why can't it be in English?

If they invite u, lu decline ajelah...its only for 15 minutes...nothing can be achieved with such short airtime. Nuraina did not do that well...Raja Petra did much better. Given your `soft spokeness', the host will have a field day cutting short whatever u have to say! lu ni muka ganas, tapi cakap lemah lembut..gua tahu!

bro, gotta admit my bahasa is not sterling but that moron of a host ( btw is he an Indon ?) literally dissects "Hog-wash" to "sampah and khinzir" shows that he's quite thick up there. Maybe he should also try "cuci-babi" or "mandi babi".Sheeesh man the way the puny mind thinks ! Even pigs are broader- minded ! And Nuraina you stick to giving inverviews in English as you'd express better without the annoying interruption of the host.

A hog can be either a fat pig kept for eating or a male pig that cannot produce a young, all balls and no sperm. Does that remind you of anyone??

Hog wash means stupid talk and nonsense. That's the trademark of lots of people.
'Everywhere there are lots of piggies living piggies' lives. And you see them out for dinner with their piggie
wives. Clutching forks and knives to eat their bacon' Thank you Beatles.
And who described the Malays as pigs? True in the sense that of all the races that make up Malaysia, only the Malays will 'eat' their own kind, sell their people down the drain.
OINK OINK

it doesnt matter my english is not good - afterall english is not my 1st language.
But,may be u forgot the show was in BM ,rite?
i hv my freedom to say wat i think is right, and also you hv u rights.
why u need to defend her so desperately ??
pls read the review by walski69 also - didnt he/she also mentioned that aina was nervous too???
i think aina can accept constructive criticism .
so, who r u so keh poh!!
Mengampu pun kena tempat lar! dont just bodek membabi buta only.

I watched the interview... nuraina wasn't that impressive. how about just stick to the journolistic nature of writing and stop trying to be like a politician.

rtm still live in a beliefs that ppl still love UMNO and BN.. damn i hate KJ and AAB, and lets hope they'll fall flat on their nose this time!

Funny how the same talk show can bring about different reviews. The same can be said about the recent HardTalk on BBC featuring Dr Mahathir Mohamad. While I thought he did extremely well and even turned the table on the host, some people saw the opposite. There were even a few who dissected his body language (and the act of drinking water) and said he was nervous and desperate under fire! Mahathir nervous under fire? Lol.

I found myAsylum's review astute. Nuraina came up with some good answers, her body language was one of casual confidence, but you can see that she was a bit taken aback by the line of (loaded) questioning. I did not expect Chamil Wariya do do better than he did, and I was right!

1/ Get a lady host. Maybe Nuraina could be roped in to play host. She looks good in front of the camera

2/ Do it in English or Malay. That was we'll cast the next wider. After all, there are many Malaysian bloggers who can't speak Bahasa, even after we've changed Bahasa Melayu to Bahasa Malaysia!

3/ Be more analytical. Chamil did well to dig out Nuraina's posting on RPK's "hogwash". That allowed for more indepth and interesting discussion.

I won't give up on the BloG programme. I think it's a step in the right direction.

Point taken, and I apologize for hurting your feelings.

I believe that we need to ukor badan sendiri; look into the mirror first.

Need a break from the serious stuff. Rocky thanks for the high res pic of Nuraina.
After all those years she still looks hot. Rocky, any chance of featuring hot looking bloggers.

you know how i just do not like to be on TV.
you know that I've been refusing to appear on RTM for this programme until i finally relented. Becos I know they won' stop asking.
and i thought, ok-lah why not?

the time was really short. that's the downside.
funny...some people thought i was nervous. actually i wasn't.

somebody (slade) said i'm lightweight political blogger, in terms of analysis etc...he's probably right. I don't make fiery postings and go on analysing situations. i suppose it's a choice i made -- in the blog.
i'm not sure if Slade knows me personally, doesn;t matter,-- everyone is entitled to his/her opinion.

actually, i don;t know how i sounded on TV.

obviously, some people expected me to be an orator or something.
haha that's rich.

anyway, thanks for posting this. also i'd like to thank your commentors for their comments.

Considering everything...time constraint and all, you did well.

Am proud of you!