Some things haven't changed.
The MSM journalists who covered the historic JB meeting between the state's 26 divisional chiefs and the Prime Minister know the real story, of course. But what they wrote and what was published by their editors could be two very different things.
My posting In other words, resign please was effectively denied the next day by MSM's assertion that nobody asked Abdullah to step down during the closed-door meeting.

Today, you get the international press reporting on the PM's handing over power to his deputy. 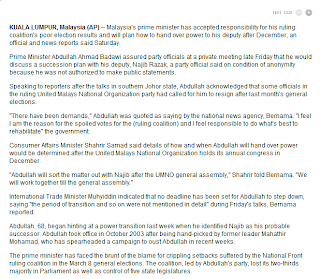 You believe the CNN?

Dr M, at a press conference this afternoon, noted that Abdullah continues to be fed lies by the people around him. I imagine the Tun meant the PM's media advisers. Read Bigdog's posting on the press conference here.

By the way, did you know who the PM's people sent to JB before the meeting on Friday to try and get the divisional chiefs to NOT go ahead with their demands for the 3S (smooth, structured and speedy) succession plan by Pak Lah?
There were two: Alwi Ketereh and Aziz Sheikh Fadzir

The MSM journalists knew of this , too.

It's a matter of time that what actually transpired will eventually be known to the masses.

what to do bro. Can you give me sesuap nasi?

The MSM are up to to their old tricks again!
In recent weeks, they have appeared to be more balanced by putting in stories about Tun Mahathir and Tunku Razaleigh to give an appearance of a reformed MSM giving balanced views.

But it looks like this is just whitewash. Why dont they realise that people are not as dumb nowadays.The credibility of the MSM has sunk to an all-time low!

Buedak-budak tingkat empatlah! These idiots are screwing the PM and the the country at the same time.

When the Bodohwi had to resign in disgrace then we must deal with these budak tingakt empat, SIL and the Indian God (KaliUlar) and cronies.

This beautiful country has been literally destroyed by these 4th floor boys.

They must pay for the crime they have committed. That Chinaman Vincent must also pay!

We must never allowed these boys to screw the country for their own benefits. The Sleepy Head is just being stupid and sleepy all the time that's why the SIL and the Ular are so powerful.

Mainstream media must be PURGE!!!! Total REVAMP!!! The complicity of the party propaganda NST, UTUSAN, STAR has cause HAVOC on our nation for far too long. Repeal the printing and publication act!!!

It boils down to his skills
Does he know his work?
Glorifying himself forgetting his ground
He will surely fall in no time

When other departmental leaders say
Away from the agreed book of ethics
Don’t let them get away………….
If a leader doesn’t take appropriate measures
The core will be broken the bridge will be lost
In the end there will no backbone

This aziz berangan nak jadi ketua pemuda but went to see tun to persuade him to ask mukhriz to step down to bring tension down. I assume he promise tun that Khairy to not run.

At the end of the day, he will not run himself and khairy did not undur. That makes khairy ketua pemuda uncontested.

The MSM journos were doing what they had to do. It was out of their hands. Even if they wrote it differently from what had been published, it would have been spiked. Please don't belittle the MSM journos. Most of them are doing what the Malay proverb says: "Sokong bawa rebah". Got it?

Karpal is getting really worried now. The race is on...Anwar vs Najib.

Haro Bro, NSTP is abuzz with news of the impending changes to be announced soon following Kalimullah Hassan and Hishamuddin Aun's big time failure to spin the image of Abdullah Badawi and Khairy Jamaluddin in the aftermath of the recent GE which BN lost. The NSTP papers - NST/BH - spinning are understandable thus your take on the MSM.
Umno supreme council should be made aware of their Singapore spy/adviser(s) Brendan Preira who gave instructions to Kamrul "Joan Lau" Idris, Chandra "Master of All Conspirators", Lionel "Crime Conman" Morais, Lee "Spinner" Ah Chai, Santha "Kali Apple polisher" Oorjitham, A. "Hindraf" Kathirasen, Joseph "anti-Islam" Soosai, Lee Siew Lian (Leslie Lau's wife and sister-in-law of Joan Lau) in the run-up to the GE. Syed "Al-cohol" Nazri was not bothered at all at what was happening to the paper.
At BH, Dato Manja and gang were happy with their karaoke session with Hisham Aun and girlfriends while Kali was entertaining his Spore paymasters at his Vicenzo Italino wine restaurant.
The Star featured a proud Kalimullah and his alcohol outlet in Bangsar early this year. Paklah should be happy because his Islam Hadhari religion allowed his close confidante and adviser Kalimullah to open up the alcohol outlet, and it must be noted that Kali, Hisham Aun and Syed Faisal Albar (NSTP CEO) were responsible in defending the blasphamous cartoon on Prophet Muhammad which was carried by NST.
Bro, if the changes do take place with Umno again condoning Kali to put his friends in NST, then God bless Umno and Malaysia.
It was rumoured within Umno circle that Khairy, Kali, Anwar Zaini (Bernama chairman) and Kamal Abdullah (PM's son) had actually drawn their own GE list which BN lost. Another shocking thing was that Brendan Preira who flies to Singapore regularly was in the know of list while BN candidates were still scratching their heads wondering about their candidacy!
Wisma Putra may also want to assist in Brendan's role in NST's reporting of the Batu Puteh case in the Hague.
Kali once told a meeting of NST/BH reporters that he's an Indian but also a Muslim but when it comes to siphoning multi-million ringgit projects, he will use the Malay/Umno platform. How smart Kali was and still is when it comes to swindling the Malays right under their nose.
Also all you Umno leaders must surely know that when Brendan left NST, Kali set up a company called Fox Communication for Brendan which again siphoned multi-million ringgit business from Khazanah and other Govt agencies.
Brendan also started a news blog with the help of his NST/Spore operatives headed by Png Hon Kwang, Joan Lau, Leslie Lau (Ex Spore NST) to spin for Paklah and Khairy but it failed miserably.
So Umno, get the SB and MIO to do a background check on all these individuals to ensure they are truly Malaysians and not Spore agents!

What TDM said about Anwar about being suitable as PM only for Israel does not befit that of a great statesman.

TDM should stop making such remarks because everytime he does so, he loses credibility with the ppl

Dear Bro,
The people must ask him to leave asap, otherwise there's nothing else left in the country to be salvaged.

What TDM meant was I am very worried that Anwar will become the next PM coz Anwar knew alot and can destroy whatever is left of my leagacy that I am trying desperately hard to preserve.

IF TDM legacy is evergreen then TDM need not worry the slightest bid...

Did OKT had ulterior motives in screwing up big time in the last GE?

Why is OKT sitting away from Pak Lah in the forthcoming Parliament sitting?

I normally don't bother to respond to malicious humour such as making fun of people's names. But I think those who continue to say 'Kalimullah' is Hindu God or anything of that ilk should refrain from doing so. At least you should show respect to the meaning of 'Kalimullah'(he who speaks with Allah). Especially if you're Muslim, pls don't make fun of the title given to Prophet Musa/Moses. I know Dr Mahathir, the statesman no less, made fun of the name and no, it's not funny. I also don't think it's funny to call the old man 'Mahazalim', 'Mahafiraun' etc. Be wise, people. If not what's the difference between you and those you criticized.

I heard Rizal Merican was sent down to pursue Johor's divisional leader to soften the tone and let Pak Lah take his own sweet time before the he hands over to Najib. He was trying to convience especially MB that someday, sometime in the future Pak Lah will eventually resign. Other promises made were not known to others. May be diffirent leader got different promises by Rizal Merican.

Anyway, from reliable sources, Datuk Nur Jazlan Tan Sri Mohamed, who is the one who spoke up first, and told the truth about grassroot inspiration and what other divisional leaders dare to say in front of Pak Lah. Good Job Datuk Nur Jazlan, for this brave action you made last week. We need this kind of person, especially at this critical moment of UMNO!

Some got to put bread on the table dude. They're just pawns. Ditelan mati emak, diluah mati ayah. You've been there, done that.

The problem is with the ones having caviar with their bread. If only they choked.

I appreciate concern for your friend kalimullah. I trust you got the meaning of kali's name after consulting your friends or from the dictionary etc. That's really good.

If the meaning is correct as you put it, that's really great. I have one observation though - the guy with that name came from the Haj in Mecca and went straight for the bottle barely a week after his pilgrimage! While having that name is good, maybe you can advice him to also try to live up to it! No hard feelings I hope, but your fren is perhaps not the best example of one who speaks with Allah! From my understanding, he who carries the name of the Almighty must also possess the qualities befitting the name, and that includes be truthful, sincere, transparent, trustworthy. I have many associates who say that your fren is far from any of the qualities described.

Have a good day Jay!