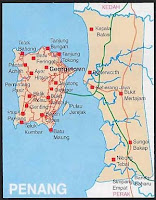 Welcome to DAP country. I've just arrived at the Penang Free School where the decision on Jelutong parliamentary seat will be announced.The whole island is talking about it. Penang is falling. BN is losing big in its chairman's own home state.

And Jeff Ooi's heading for an "overwhelming victory" in Jelutong.

update 9.30pm
Jeff hasn't arrived at the counting centre. He's been summoned to a meeting of DAP leaders. "We expected to win here. But nobody expected that we'll to be forming the government in the state," an aide told me.