Indonesian Blogger #30. Please congratulate Ong Hock Chuan the Unspun blogger, who is a "modest" No 30 in the republic's latest Top 100 Bloggers ranking.
I can boast that he's been on my blogroll since the start. Ong, my senior at the Star in the 80s, is also in the team of Indonesian bloggers who organised the Pesta Blogger and claimed Oct 27 as Indonesia's National Blogging Day. 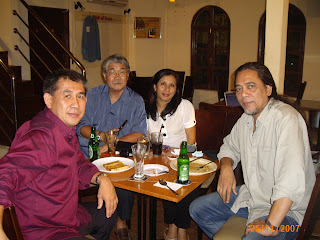 Pic [by Shanghai Fish] of Ong with Malaysian bloggers Zorro, Nuraina A. Samad, and Rocky's Bru during a recent visit to the National Press Club in Kuala Lumpur.

Ong Hock Chuan's blog is a must-read. In fact it should be ranked among the top 3.

YES to BERSIH! NO to HINDRAF!
Say NO to RACIST...

Each blogger has his/her worth of salt.
Some may actually lose their measure of saltiness/standing mostly due to their own callousness.
For visitors to blogs it's like separating the woodsticks from the hay.

Matderis & Sayadahbosan,
You are welcome to the Press Club, where the mi hailam is said to be about the best in the city. It's a members' club but you can be signed in as a member. E-mail me at rockybru@gmail.com when you decide to come. Lots we can talk about.

By the way , didnt know you were a HEINEKEN man Bro !Or was it left by Steve while he was taking the shot :)

thanks fro the invitation

are you Ramli Sarip's doppelganger?

zorro, the old crack fatty who doesnt read mainstream newspaper yet critises the whole wide world. It's like a Bangla construction worker critising a doctor how to operate on a man.

jediraj,
why don't you come over to the Press Club and find out? Long time no see, bro.

How could these people be so ignorant, nonsensical and bite the hands that feeds them?

This ongoing issue, that seems to be nudging our hospitable head almost way too hard now. Within the gratifying myth that we conjure up, on how we are from the same roots and share similar folk traditions. but almost too often too much now these south to the border neighbor, our ill mannered less sophisticated separated by the sea neighbor are almost wanting us all here to really admit that we actually does not gladly embrace what similarity we share, and rather be admitting at how they are portraying a behavior so totally over reacting and to be taking this thing way off the original context and should not be treated either seriously or if not to be portrayed so downright dumb.

How these so called Indonesian activists are are taking a rash and harsh views and stance towards our country here. these so called activist who seems to be thinking well of themselves, having to think that how they are so loud in their act of defiant and ready to be filmed by the press as so rebelliously hot headed and yelling, throwing poop and climbing on the gates of our embassy there.

Well, so much for how are they being portrayed as national heroes in their nation but over in our land, by seeing reports channeled out by media, it is just simply justifying our long in-depth views at how irrelevantly ignorant lower class minded citizens these bunch of people are. We almost had always looked one or two notch down at them, but this recent upheaval, really sealed the perception block. the apelike feces throwing acts, the burning of our Jalur Gemilang, the picketing at our Malaysian embassy, the on top of the gate barking and howling, are all ultimately perceived and judged by our simple minded Malaysian commoners here as acts that only will be done by third class worldwide known reputation society, that tends to always over re-acts to situation. Almost like watching tribe people program in the national Geographic channel. You can never tell the difference.

But, out of this out of proportion ordeals, the most disturbing facts would be how could this bunch of people who almost once or even more than that, or got relatives over in our country getting paid by our currency, be it legally or illegally. How could they be so ignorant to the facts at how our soil had been contributing to raising their young generations? how our burnt at Jalur Gemilang were the flag that enable them to feed their family, to enable them to feel at home and much more, enable them to have savings to go further in life. How could they be so nonsensical and non sensitive towards those things?

We are almost entirely your bread and basket if compared to your own poor stricken motherland. How rude and shameless of you to scowl and howl at us so disproportionately. How could you keep on biting the hands that continuously with sense and heart keep feeding you and your migrant generations with nutritious way of life and healthy frame of mind? Just remember how disarray and poor you will be if the land that you throw poop at do not need your service anymore. To cease appreciate your non stopping ever flowing group of people from crossing the sea to actually be a human being again. Just hope that after all this biting and chomping of the appreciative hands that never stop to give, we Malaysian are still having the empathy and sympathy to deal with your lower class tribe like antics anymore in the future.