People's Freedom Walk. The Bar Council is organising another walk on Dec 9, 2007 in conjunction with Human Rights Day. The walk will start at Sogo, go through Dataran Merdeka and end at Central Market in KL.
A multi-religious forum is also being organised.
Lawyer Edmund Bon, who is chairperson of the Bar's Human Rights Committee, said he hopes to get 1,000 people to walk on the 9th.
I think it'll be very difficult to get a thousand Malaysians to walk.
Human Rights Day is celebrated worldwide on Dec 10.

... and take a walk, Siva!
N. Siva Subramaniam, whose statement about last Saturday's yellow march incensed many, should quit Suhakam, says Bersih, the elections watchdog that organised what has been deemed as the largest peaceful anti-government gathering this century.
MalaysiaToday has the story, too - Siva should resign as Human Rights commissioner 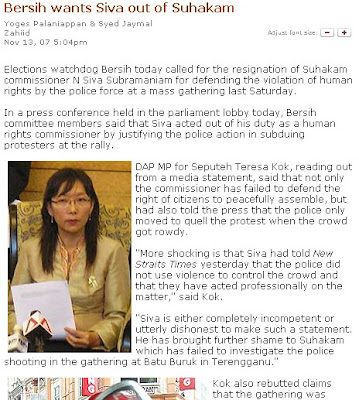 what you say , abang Rocky.

to much walk ruins bro!

Based on your use of the word 'professional"---I think you are one too -- a professional a..e hole!

Dey Aneh Siva , to come in defensive of the police actions on the clampdown will only earn you ur position in the useless SUHAKAM but indirectly u've dy lost the public utmost respect for u for yr stupid ignorance !!!!!

Tell me frankly Aneh , if there is nothing so wrong with the Goverment , then why the hell do they need to result in the execcesive police action on the protesters when it is only a peaceful walk to protest ?? U mean that if that monkey Khairy can led a demonstration during US Secretary Condoleeza Rice visit which is deemed LEGAL then we the rakyat of this country when protesting a walk is consider ILLEGAL ???
WTF man ?????
Wat logic is this , Aneh ??
Wat time of logic is this, Mr. PM ??

That's right! Kick everyone who doesn't agree with you out. That's very democratic.

Bersih my a*se!!! Thank God these people aren't in power.

Sorry to digress, what happened to Malaysia Today? Couldn't get in at all. Can anybody help?

bro,
I'm ashamed of this Siva of Suhakam on his observation and report on the 10eleven march in the media....In Japan they lead you to a quiet room and leave you alone with a small sharp dagger to do the country an honour and favour......Siva ...take that cue...!
nobody will miss you !

What color this time?

Millions saw what happened on tv. People were roughed up, and water cannons were freely used. Siva, are you blind, or is your head full of shit. Or have you been reading all the crap in the mainstream papers which glossed over the police's supposedly impeccable conduct.

da real deal has a point there. everybody is entitled to their opinion. a diff of opinion and they are calling for his head. what the..?
and shanghaistephen, you cross the line with that comment dude.

Suhakam can't even protect or fix their own website, even after so many days from being hacked speaks volumes of their abilities and commitment.

That section of the site was defaced a few days back and up until now, it's still being unattended to.

are the lawyers going? it will be interesting to see whether FRUs will spray water cannon at the lawyers.

Rocky: not sure whether you've seen the article in the NST today, but it seems that the 18 children who were detained during the 10-Eleven rally are going to be rehabilitated by the Education Ministry

I don't know about everyone else, but this is getting ridiculous. First they accuse the parents of dragging the kids to the rally to be used human shields. Using the government's line of argument, then the children should be treated as victims in need of counseling and not criminals in need of rehabilitation! There are a number of other points in that article which also do not make sense, but I think I'll leave it to other commentators more eloquent than me to take the (non)logic apart.

(let me also make it clear that in no way whatsoever do I condone the detention of the children involved in the rally. Unless it can be proved they did something outright violent and illegal like set cars on fire and throw molotov cocktails. Children (especially six-year olds) do not need to be detained or rehabilitated) )

I think all us commentators need pause and take a deep breath. Let reason and persuasion give voice to our words, rather than unbridled emotions and a wild tongue. Even if we're angry at what we perceive as injustice and ignorance, let's not give those we are trying to engage with reason to tar us with the same brush as those who practice what we are taking a stand against. Like it or not, people will judge us by the content that we post.

Even if you don't agree with what other people are saying, try to see it from their point of view. Not all govt politicians are bad, and not all people who took part in the Bersih rally are narrow-minded zealots.

As it is, we've not done enough on the blogs to counter the MSM and G-man propaganda to 'spin' that event into something contrived by the 'opposition'.

The locals will not understand the nobler issue of universal human rights until the transgressions happening at home are made clear to them. Besides, 1000 walking 'yuppies' ain't a pretty sight by any standards. Hehehehehe.....

Still, we have about three weeks. I'm cautiously hopeful but we need to 'innovate'.

Hmmmm .... reminded me that Bar Council endorsed Interfaith Commission (IFC) few years back, in which Islam the religion of the Federation is supposed to be subjugated to the IFC.

To add, some lawyers members of Bar Council will not agree with bar Council stand on multifaith issues .... uhhh ...

Just shows Bar Council do not represent its members but is personal view and stand of loudest speaking exco members of Bar Council. Many Bar Council members opposed to the position of Bar Copuncil exco and are fighting for the Jabatan Ugama side.

Kalau jumpa ular, harimau dan lawyer and you've got one bullet, better shoot the lawyers. Most unreliable. You can predict the ular and harimau thinking but not a lawyers. They follow who pays them.

Suhakam has all this while been a toothless tiger and now we can see it has turned into a wimp!

With a sissy fella helming it I dont see how SUhakam can do justice for us. Pls unregister SUhakam and go join Umno!

Siva got his datukship through government recommendations??

Then he must ampu gomen la

invite yellow digimen also to join the Dec9 and add volume to the crowd.. the more the merrier!

With or without Suhakam, the nation still tuning to a same old melody again and again and over again..what different does it make..? At least Bono of U2 sound good "with or without you".. hahaha..

As it is, this supposedly rakyat initiated Gelombang Kuning is already hijacked by politicians with SPR as issue and the symbolism of having ex convict Anwar serving the petition at the Istana Negara.

Other than his diehard and the ignorance, Anwar is a walking hipocrit not acceptable to the rakyat and an irrelevent cause. Yo! Where is the rest of the tape? Excuse excuse excuse ...?

The intention of Bar Council to celebrate Human Rights Day with an interfaith talk will be another attempt at hijacking the momentum of Gelombang Kuning. They shouldn't, in words of Khairy Jamaluddin, "push the envelope" with divisive issues. Save it for later lah ...

Remember that Bar Council were the supporters of the controversial and unconstitutional IFC. Wake up, the Gelombang Kuning were mostly 90% Malays. Except for the few token ones, generally Chinese tak ada telor. Mere complainers and typically selfish lots!

Bar Council march and planned interfaith talk will be another attempt to question the status, its special accord under the constitution, and subjugation of the "religion of the federation" (not official religion) of Islam.

This is not to the interest of majority of the Gelombang Kuning marchers'. Off course, there are fringe Muslims on their side like Harris Ibrahim, Malik Imtiaz, Sisters in Islam, and other pengkafir-pengkafir and penyesat-penyesat orang Islam yang lain ... (Bukankah mereka ini wajib diperangi seperti mana murtad2 yang memusuhi dan memerangi Abu Bakar selepas Nabi wafat?)

Ah well ...What do expect from a profession that defend "cheats, robbers, rapist, murderers, ..." yet pretend to be honourable under the principle of right to a attorney? Face it, they defend, and champion the interests of those paying clients, who degenerate humans they are under the pretext of rights?

Off course, you are not guilty until proven. See how twisted lawyers logic are? It also serves to show that lawyers are not an honourable profession. So tell these professional body turned activist Bar Council lawyers to learn some conscience, clean up their tainted profession, and properly represent the legal profession.

Leave Gelombng Kuning alone and do not support these crooked people!

ala lee lam thye... hope for a datukship & chairmanship of some goverment agencies

WIth the perception of Perhimpunan Rakyat (supposedly part of Gelombang Kuning) hijacked by politican, Bar Council should not hijack it and introduce divisive issues like interfaith issues.

If the upstairs is okay, people to people issues can find resolution. In the meanwhile, lets not divide the people.