Most hated politicians in Malaysia: Where's the Dynamic Duo? 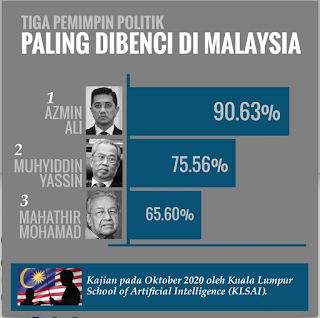 KL, Nov 2: The joke is that it should stand for KL School of Anwar Ibrahim. :) but to be fair to those chaps at KLSAI, any survey on the country's least popular persons (not just politicians) would probably churn more or less the same result. Maybe Azmin Ali won't always be ahead of Muhyiddin Yasin and Tun Dr Mahathir Mohamad.

I don't have any issue with what KLSAI stands for (eh sai, which means can, buay sai, cannot, or pang sai, to shit) but I wonder why the dynamic duo from DAP did not make the list. Not even for honourable mention. 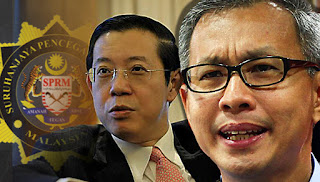 Many still hold Lim Guan Eng and Tony Pua responsible for the massive and quick decline - and the eventual fall - of Mahathir's PH government earlier this year. You may or may not agree, but I've been told that if the two are no longer in DAP, even the staunchly anti-DAP Hishammuddin Hussein would be prepared to reconsider his stand about not ever working with that party.

Tony Pua is hating Najib but not exactly loving Anwar Ibrahim? - The Mole