"Brains behind sex clips": Since when was this a crime? 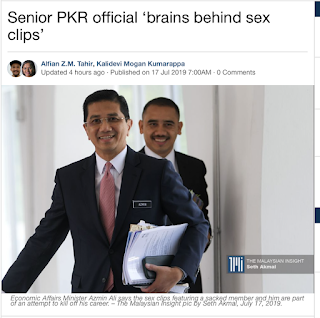 Rahim Thamby Chik, for example. He was established as one-third of the "brains" behind Anwar Ibrahim's 2011 sex clip (or, in today's new media parlance, sex clip of someone who resembled Anwar Ibrahim). Rahim was former Melaka Chief Minister and Umno Youth leader, a VVIP all his life. If fate hadn't intervened, he might even be Prime Minister of Malaysia today instead of Dr Mahathir, or Najib for that matter.
If you ask him, he would probably maintain he did nothing wrong or criminal in relations to the 2011 sex clip. Semuanya demi bangsa dan negara.

p.s. Rahim was fined RM1,000 for his part in screening the 2011 sex clip to selected members of the media at Carcosa [Read here]