So, is Guan Eng the one pissing Daim off?

Mid Valley, Ramadan 8: I wrote the posting Who's Daim so peeved at? the other day because I got really curious after reading the former Finance Minister's interview in conjunction with the PH government's first anniversary in power. It was clear that Daim Zainuddin was annoyed big time with some of the Cabinet ministers.

I have my suspects and have been hearing stories about their' "shenanigans", but I won't be able to prove anything if I were to think aloud.

But blogger Life of Annie seems so sure who it is that has been the subject of Daim's great annoyance. 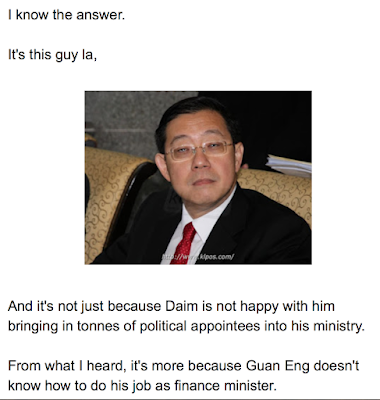 You can read her posting The One that Daim can't stand.

Well, that's one advantage of being an "anonymous" blogger, I must say. Publish and fear not of being damned. But having said that, I must add that Life of Annie has been around for quite a while on blogosphere and is one of the few enduring Malaysian socio-political bloggers, with an army of "followers" [read "haters"] to boot. What this means is that as a blogger she has credibility, having earned it by getting it right with many, if not most, of her speculations, theories and analyses.

I might have been tempted to name Lim Guan Eng in my original posting but if had done so I could easily be wrong and Guan Eng, who is fond of suing people including journalists, may sue my ass off. Best to ask Daim if the Finance Minister is the one.

That is something I'm hoping our more free mainstream media would do ...

In any case, Daim's point about the long string of political appointees those unidentified Ministers are bringing to their ministries to take over the role of the civil servants is spot on, according to Cuepacs, the umbrella trade union representing workers in the government sector: