Rimba Kiara, 12 Ramadan/17 May: After a year of silently hoping that YB Khalid Samad would do the right thing by the TTDI residents over the long-drawn Rimba Kiara issue, YB Hannah Yeoh is now on full combat mode. Ironically, she will be at war with a "friendly party", as she and Khalid are politically on the same side - the Pakatan Harapan government side. Khalid is Federal Territory Minister while she is Deputy Minister of Women, Family and Community Development.

Hannah is also the MP of Segambut, a FT constituency. Rimba Kiara, one of the few green lungs left in the city, is right smack in her constituency, so she has a direct interest on the matter.

Khalid is chairman of Yayasan Wilayah Persekutuan, which stands to benefit handsomely from the controversial mega project on Rimba Kiara. Some people call this a blatant conflict of interest but Khalid thinks "Conflict of interest" accusation just to delay Rimba Kiara project).

The two PH leaders have been throwing barbs at one another on social media like there's no tomorrow.

Hannah is seeing the residents again tomorrow. Her latest on Twitter:


"They (TTDI residents) can be very pushy, and they act like they own the park." - Very disappointed" Khalid tells Hannah to speak to him instead of media - The Star, 16 May

"It's not personal. Just doing my duty." - Just speaking up for the people, says Hannah on Rimba Kiara tiff with Khalid -The Star, 17 May


p.s. The Opposition are mere spectators as far as this Rimba Kiara is concerned, perhaps because the proposed controversial project happened when they were the Government. It's hard to miss this latest twitter posting by the Umno deputy Youth leader, though. Is Khalid's head too big for his own good?: 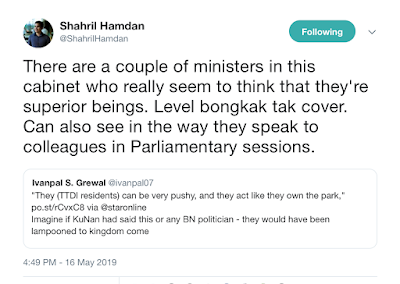