"TH took appropriate measures" after Zeti's letter, according to Bank Negara in 2016

Bangsar, 9 April: Federal Territory Minister Khalid Samad's bungling  of Kiara Park  has convinced many that older brother Shahrir, the original FT Minister and former Felda chairman, is the smarter sibling by far. If I had any doubts about that in the first place, Shahrir's posting on Facebook in defence of Tabung Haji (and, specifically, the previous management of TH) yesterday might have restored my faith:

For context, the new management of Tabung Haji, the pilgrimage fund, has just announced a hibah of 1.25 per cent, a mighty drop from the heavenly dividends depositors enjoyed under the previous management/old government. The PH government blames it on "poor management and governance in the past" (TH dividends see sharp drop for 2018 - FMT). A Bank Negara letter to TH in Dec 2015 was used to back this claim: the letter is supposed to show that TH had been in trouble even back then but he previous management/government weren't listening.

But did the previous management of TH respond/listen to the central bank's letter? Apparently, according to Shahrir, it did. This was evident in the Bank Negara's press statement in Jan 2016, a month of so after it had sent the advisory to the management of TH.

Here was what the Bank Negara had to say:

In relation to Lembaga Tabung Haji, the institution has proactively taken appropriate measures to further strengthen its risk management practices, both on its own initiative and in response to earlier engagements with the Bank. These will reinforce a sustainable and healthy financial position of the institution going forward.

Back to Khalid Samad, he hasn't commented on TH for quite a while. His last tweet Google recalled for me was Dec last year: 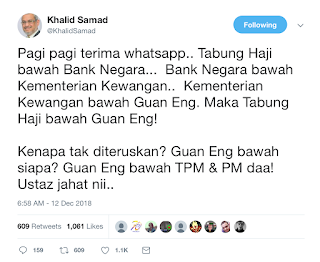