Here's a one-hit wonder Who let the dogs out, quite relevant seeing how dogs are in the news these days [Dog broke my wrist, says Najib's lawyer]

Puchong, 13 March: A. Kadir Jasin thinks Pakatan Harapan "has actually made a pretty good progress for itself and the country".
First and foremost, "Malaysia is no longer a kleptocracy".
"Secondly," Kadir writes in PH is not a one-term government, "the problems of the people are being attended to in a more systematic and transparent manner with a longer-term view of making "shared prosperity" the basis for sustainable wealth creation and distribution".
But there's no "thirdly" or "fourthly" or "finally", though. The rest of AKJ's posting turns into one big lament. Not just Kadir's but also Dr Mahathir Mohamad's:

“What difference does it make whether they wear black or white shoes?”
“Yes, cigarette smoking causes cancer but how do we know whether the smokers are three metres away from the restaurants?”


“And what is Malaysia Baru? Is it exclusively about the election manifesto?”

Never one to mince words, AKJ says heads must roll for this government to work:

"As the one-year milestone approaches, the PH will be subjected to greater scrutiny by the people, the press and investors.
To pass this public relations and confidence test, the PH has to improve its story-telling. It may even have to consider rearranging or even firing some cast members.


The plot and narrative must be understood and believed by the people and the cast must be respected. There is no role for clowns and comic characters.


Ministers, Menteris Besar and Chief Ministers must engage in self-examination and, where necessary, self-criticism.


Don’t rush to blame the press and the people if the flying car story flew past their heads and the government is seen as inept, arrogant and aloof.


Moving ahead, the PH must work hard and smart to fulfill the aspirations of the people and to prove to them that it is not a one-term government. It is here to stay.
Wallahuaklam." 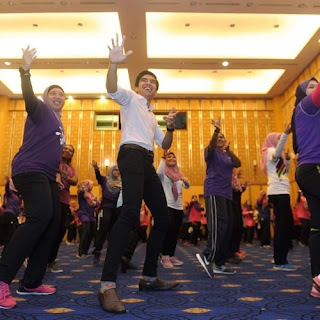 In Harapan, a one-term government Helen Ang says if Umno and Pas stay happily married, GE15 is in their bag. DAP's panicky response to the union is very telling (and damaging to the coalition), she says. The poor Indians are being marginalised under Pakatan, with little bargaining power, she adds. And the antics of the PH ministers mainly from Pribumi (Mahathir's party), are not helping, Helen tells us.

"All three of the ministers embroiled in dubious or missing bachelor's degree scandal are from Pribumi ...

"Yet the most cohesive and solid Harapan party DAP is kowtowing to the party's weakest party Pribumi. Harapan makes a mockery of the meritocracy concept.

"There is no way Harapan can last more than one term in Putrajaya."