MRT: Were we foolish to have wanted, built it? 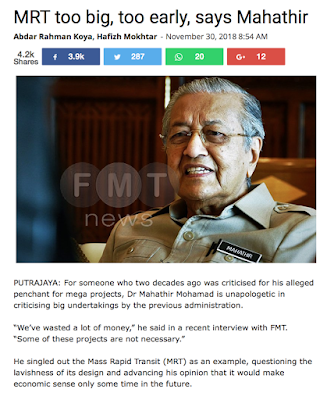 Too big, too early, too lavish. I won't know what's lavish - read MRT too big, too early, says PM - where the MRT design, trains, etc are concerned. Some people have said the same about some of Dr M's projects in the past, for example the bridges of Putrajaya and the mosques when I could only see beauty and class then what others were calling lavish. Subjective, perhaps? Or selective?

But I - like Dr M, I assume - don't use the MRT to commute. I have heard, though, of how packed and congested "like tin sardin" the MRT trains can be during peak hours. So perhaps the system's not big enough, contrary to Dr M's assertion?

Certainly it can't be "too soon". If we build the MRT in 2050, imagine how much it would cost. Singapore, for example, had theirs running in 1987. When the idea of building the MRT system cropped up, some of the politicians were dead against it. One even called the the idea "foolish". Try telling a Singaporean to imagine life without the MRT today.