Updated:
In defence of the Malaysian Anti-Corruption Commission and other authorities that conducted the raid, A Voice quotes on former high-ranking MACC official in What happens in Vegas should stay in Vegas

"Tangkap orang pembangkang, MACC dikata macam-macam. Tangkap orang BN, pun kena juga. We have no friends and it is OK."


In Umno, a divisional chief is a big deal. There are only 191 divisional chiefs nationawide. PM Najib Razak is the chief of Pekan division. DPM Zahid Hamidi is divisional chief of Bagan Datoh.  So just because you may not have heard of Rizalman  Mokhtar before his Vegas arrest does not make him a small fry.

Not small at all.

But neither is his current predicament. His testing positive in a drug test following his arrest at a ktv joint like Vegas is not an "isu kecik" (small issue). Rizalman has to understand that. He must also accept that even if he gets to clear his name, prove that his Nescafe had been laced, and that it was indeed a political sabotage and character assassination, the damage is done. And the press conference didn't really help his cause, if you ask me.

Drugs abuse. I tweeted this earlier this week: 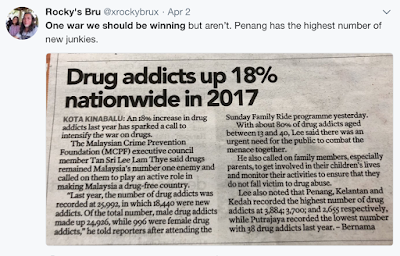 Penang, Kelantan and Kedah are losing the war badly. We shouldn't politicise the issue but it so happens that Penang and Kelantan are ruled by DAP and PAS, respectively. And Kedah, well, I shouldn't say anything ..

Kedah in the news, in today's NST: