KL, 010917: A survey in conjunction with our country's 60th Merdeka found that most Malaysians are, actually, mighty proud to be Malaysians. 98.3 per cent of the respondents said so, to be exact [Read Bernama's Overwhelming majority are proud to be Malaysians]. Eight out of 10 said they would never leave this country for another, come rain or shine. Through thick and thin. Like me. And probably you.

KUALA LUMPUR, Aug 30 2017 : A survey conducted among the people in the run-up to National Day 2017 found that an overwhelming majority are proud to be Malaysian.

In the study, conducted by commercial and social intelligence outfit Kajidata, 98.3 per cent of the 1,041 registered voters surveyed throughout the country stated “I’m proud to be a Malaysian”, a three perent increase compared with last year’s findings.

Kajidata advisor Prof Datuk Seri Syed Arabi Idid told Bernama the same survey, conducted from July 10 to 18, also found that a strong patriotic fervour among Malaysians, with 80.2 per cent celebrating the National Day on Aug 31 every year, a date they considered auspicious and very meaningful to them.

Syed Arabi, a former rector of the International Islamic University Malaysia, said the survey also found that Malaysians were well aware that unity is among the important building blocks of the nation. The survey also found 85.9 per cent of the respondents saying the Rukun Negara can serve as the guiding principles in promoting and fostering unity.

Almost 80 per cent of the respondents also stated that they would not migrate to another country regardless of the current situation in the country, another testament of their patriotism. In the study, conducted via a telephone poll, only 12.2 per cent had indicated their intention to migrate.

Established in 2015, Kajidata (www.kajidata.com) has the mission of effectively acquiring and seeing beyond data and unearthing actionable insights. Respondents are selected based on random stratified sampling along ethnicity, gender, age, state and national demographics to reflect public opinion on current issues with greater accuracy. – Bernama

And quite certainly for James Chai, a Malaysiakini contributor who has just returned after four years as a Malaysian student abroad.

Sadly, instead of being welcomed home, he found himself being treated like a fool for not ditching his country. He reported:

A day after I landed in Malaysia, I followed my mother to the wet market in Petaling Jaya. The local grover asked my mother if her "bodyguard" (myself) would be going back to London to work. My mother said no.

The grocer admonished me for coming back. “Why don’t you stay abroad and find a job there? The salary’s five times higher than what you can get here. It’s also fairer and more transparent!” There is no place for you here, he said.

He looked into my eyes with some sympathy before relentless anger compelled him to say: "Malaysia no hope."

And instead of giving the likes of James Chai hope and encouragement, he gets the total opposite from supposed Malaysiakini commenters.  Our children leave because they are second class citizens here,  the Malaysiakini editorial says.

Lim Kit Siang did not tweet what James Chai wrote about hope. The DAP big boss tweeted this: 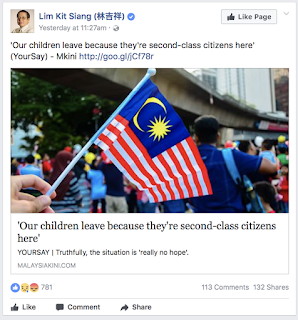 p.s. Of course, Kit Siang's children did not leave this country and are no second class citizens. But such is the hypocrisy of most privileged Malaysians.