A landmark court decision that the WSJ, Sarawak Report and the like wouldn't want to know


Note: The sender is referring to an earlier report The US is preparing to charge financier Jho Lo on Malaysian 1MDB scandal published by WSJ on March 21


The landmark court decision the WSJ is allegedly ignoring: 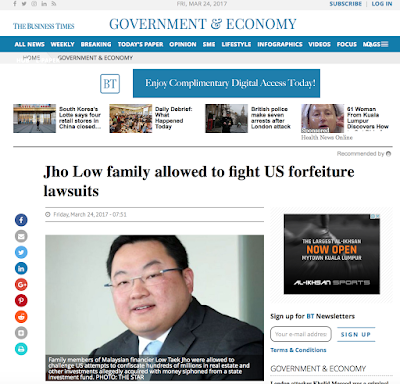 (Bloomberg) -- Family members of Malaysian financier Low Taek Jho were allowed to challenge U.S. attempts to confiscate hundreds of millions in real estate and other investments allegedly acquired with money siphoned from a state investment fund.

A federal judge in Los Angeles this week granted requests by the holding companies that control the assets on behalf of Low to file late claims in eight forfeiture lawsuits. The holding companies asked for permission to file claims after courts in New Zealand and the Cayman Islands allowed them to swap out the Swiss trustees that had refused to fight the U.S. allegations.

The Low assets at issue include a stake in New York’s Park Lane Hotel, a $107 million interest in EMI Music Publishing, a $35 million Bombardier Jet and a $30 million penthouse at Time Warner Center in New York. The U.S. has asked for default judgments against some of the assets because no valid claims had been filed in time.

The Justice Department filed more than a dozen cases last year to recover over $1 billion in real estate and other assets the government claims were bought by Low, known as Jho Low, and his accomplices with money stolen from 1Malaysia Development Bhd. The family members, including Low’s brother and father, had previously been denied permission to bring claims because as beneficiaries of the trusts, rather than trustees, they have no legal standing to fight the U.S. allegations.

U.S. District Judge Dale Fischer rejected what she called the U.S.’s “rough justice" argument that the Low family couldn’t have it “both ways" by shielding their assets in convoluted ownership structures and at the same time being allowed to pursue claims by replacing the trustees who had failed to do their bidding.

Low, who is known for partying with Hollywood celebrities Lindsay Lohan and Paris Hilton, is also friends with Riza Aziz, a stepson of Malaysia’s prime minister and a producer of “The Wolf of Wall Street,” which the U.S. alleges was funded with stolen money.

Low has said he provided consulting to 1MDB that didn’t break any laws, while the fund and Malaysian Prime Minister Najib Razak have both denied wrongdoing.